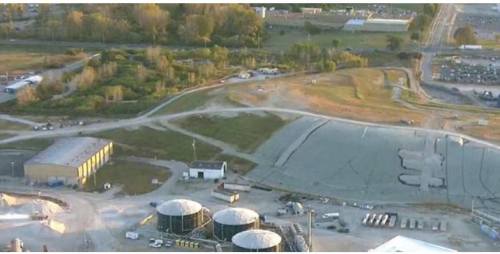 The survey effort, conducted by the DNR, took “soil, sediment, dust and surface water samples” from multiple locations surrounding the West Lake Landfill. The samples were sent for laboratory analyses with results to be released in a pending final report.

In an email response, Tom Bastian, the Missouri Department of Natural Resources director of communications, did not state an estimated time for the final report to be released. He said the survey data must be reviewed and verified, and when available, the conclusions will be posted at this web address.

In the introduction, the report says it is an update which “identifies the selected sampling locations, details the radiological survey methods, and documents initial results.”

Missouri Rep. Bill Otto, D- 70th District, issued a press release praising the DNR’s efforts to identify landfill contamination. He said one of the big questions he has is “why in the world is the State doing the Environmental Protection Agency’s (EPA) job?” (Otto’s press release can be viewed below.)

“There is a lot to the report, it’s preliminary, but verifies what people have been saying for a while – that (radioactive waste) is migrating off site,” Otto said. “The radioactive material has been there for a long time, and it almost has to come off-site somehow or someway. This report just sort of validates that.”

The West Lake Landfill is located in Bridgeton, Mo, and contains nuclear waste from the World War II era. Public concern has been intensifying, in part, because of an ongoing underground fire located in the adjacent Bridgeton Landfill. The fire has generated concerns that it could potentially reach the nuclear waste.

In the conclusion of the interim report, findings say “the vast majority of readings in each area fell in the lower range of values for gamma radiation, with brief fluctuations to comparatively higher values.” In addition, the report notes “field screening observations did not identify any areas of health and safety concern for staff. However, two soil sample locations, located on or immediately adjacent to private property north and northwest of area 2, had areas of persistent readings comparatively higher than other detections in those areas.” To read the full report or to see maps and photos of testing areas use the link provided at the end of this article.

Bastian also stated in the email response, “While litigation continues on this matter, the DNR continues to monitor Bridgeton Landfill’s operations to verify compliance and to ensure violations are corrected.”

However, SB600 comes with a seven billion dollar price tag, according to Otto. He said the bill has a “huge physical note to it” and the idea of it being successful as currently written is “virtually impossible, but it does draw attention to the issues surrounding the landfill.”

Otto said he can make the argument that Missouri has a responsibility for the area around the West Lake and Bridgeton Landfills. The Cold Water Creek area contamination is a more complicated issue that does not fall under state authority. He said dealing with the area directly around the landfill would involve possibly less than $15 million and that might be an option.

Otto was encouraged by the number of senators that attended the hearing and were asking sensible questions about the issues. The next step for the bill is to be voted out of the committee process.

To read the full DNR report click on the link below.

To read Bill SB600 summary click on the link below.

UPDATE: This article has been updated to include comments requested from the Missouri Department of Natural Resources.

Environmental News:  Barrier Proposed For radioactive Issue at West Lake
(Lenexa, Kan., Dec. 31, 2015) – EPA Region 7 has announced its decision to proceed with the installation of a physical isolation barrier for the West Lake Landfill Superfund Site in Bridgeton, Mo.  The decision also calls for the installation of additional engineering controls, such as cooling loops, to prevent potential impacts that could result if a subsurface smoldering event were to come into contact with the radioactive materials contained in the West Lake Landfill.
“Finding a solution to mitigate the potential impacts of a subsurface smoldering event is a top priority for the community, and a top priority for EPA,” said EPA Region 7 Regional Administrator Mark Hague. “Today’s announcement is the first step in moving forward with the installation of a physical barrier and other engineering controls to address this issue.”
“We are now working through the highly complex details of implementing our decision and the associated legal steps. Once the plan is finalized, we are committed to providing this information to the public,” Hague said. “EPA will use all available enforcement authorities to ensure implementation of this work.”
The agency will continue to work closely with the Missouri Department of Natural Resources, U.S. Army Corps of Engineers and other stakeholders as final plans are developed. Construction activities will be carried out under the direction and oversight of EPA, and with expert support from the Army Corps of Engineers.
EPA will release additional information, such as location of the barrier, once plans are finalized. The installation of a physical isolation barrier, and other engineering controls, will proceed as EPA continues to evaluate the remedy decision for the West Lake Landfill Site. 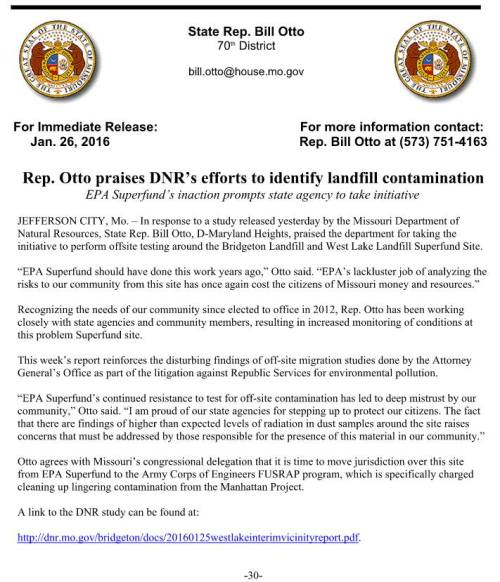