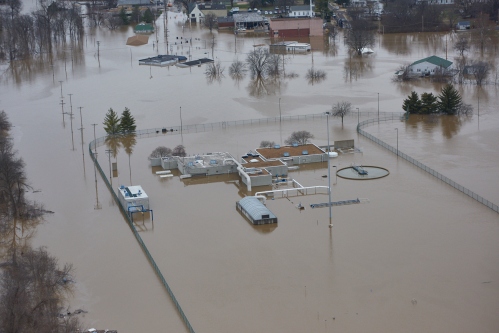 Don Corrigan will have in-depth coverage on the situation next week. Be sure to check back with Environmental Echo for Don’s article.

Last month, a prolonged period of rainfall occurred from the early morning hours of December 26 to the evening of December 28.  The St. Louis area received a range of six to 12 inches of precipitation, with an average of nine inches of rain falling over the three days.  This rainfall impacted area rivers, causing severe flooding throughout the region.  The Meramec River reached record flood levels at 44.1’ – eclipsing the level reached during the Great Flood of 1993 – causing flooding and damage at three MSD treatment plants.

“Our top priorities are to restore service to our customers and to help them recover from the basement backups they may have experienced.   We have made significant progress, bringing the Grand Glaize Treatment Plant back to full wastewater treatment in a matter of weeks.  The Fenton Treatment Plant suffered far worse flooding and more damage.   Our work there will take more time and will be measured in months, versus weeks,” said MSD Executive Director Brian Hoelscher.

The Grand Glaize Treatment Plant was built in the 100-year floodplain, with critical facilities placed in the 500-year floodplain.  The Grand Glaize Creek, which became engorged with flood waters, runs directly to the south of the treatment plant.   Crews proactively installed a temporary sandbag wall around the plant.  When the Meramec and connecting waterways swelled to historic levels, the temporary sandbag wall was breached and portions of the plant flooded.  MSD was able to restore partial wastewater treatment at the plant after a matter of days, and now full treatment has been restored.

“We spent the last week completing a series of tests on our systems at the Grand Glaize Treatment Plant,” said MSD Program Manager Jay Hoskins.  “These tests show that the plant’s outgoing water quality meets permit levels required by the Missouri Department of Natural Resources.  This means we are once again treating wastewater as effectively as we were before the flood.”

The Fenton Treatment Plant, built within the 100-year floodplain, suffered far worse damage.  On December 28, 2015, internal flooding began from within MSD’s own collection system, disrupting and damaging operations.  48 hours later, flooding from the Meramec itself overwhelmed the plant when floodwaters topped the permanent, MSD-constructed 500-year levee around the Fenton Treatment Plant.  At one point, six feet of floodwater covered the entire facility.  As a result, it has taken MSD staff much longer to access the entire plant and assess damages.  Currently, the plant’s pump station is being used to pump wastewater around the plant and maintain uninterrupted service for customers.  MSD crews and contractors are working to salvage the plant, restore power, repair and replace essential systems, and bring it back to full operation.  A priority for MSD is to determine the cause of the internal flooding from its wastewater collection system in order to prevent similar damage in the future.

While the Grand Glaize and Fenton Treatment Plants sustained significant damage and interruption of service due to the historic flooding along the Meramec River, the Missouri River Treatment Plant, built within a 100-year floodplain, also experienced flooding in one building located in a low-lying area as a result of the heavy rains.  A quick response by MSD staff to augment existing operations prevented any interruption in treatment.  Following the Great Flood of 1993, the levee surrounding the plant was increased to 500-year levee standards.  Today, this levee – along with other levees in the area – protect the treatment plant.  However, the large amount of rainfall caused flooding within this levee protection.

In addition to the damage sustained at the three treatment plants, throughout MSD’s service area, the District received approximately 3,000 calls for service during the rain event and subsequent flooding.  MSD crews responded accordingly.  MSD saw 1,382 basement backups due to overcharged mains, meaning that during the rain events, more water entered the system than it could handle.  MSD also verified 263 basement backups due to blocked mains, meaning that flood debris prevented water from flowing through the mains.  An additional 350 calls were related to street flooding, to which MSD crews also responded.  About 1,000 service calls were determined to be overland flooding, which is unrelated to the operations of the sewer system.

To date, MSD has sustained an estimated $24 million dollars in overall expenses and damages due to the rain and flood event.  Part of this larger number, is an estimate of $16 million for recovery at the three treatment plants.  Insurance and disaster assistance from FEMA and other governmental agencies is expected to cover the majority of these losses.  However, it is not yet possible to determine exact numbers.

Further updates will be released in the coming weeks as the recovery process and timeline for the Fenton Treatment Plant becomes clearer, and the totality of losses and expenses sustained by MSD are finalized.

Check back with Environmental Echo next week for Don Corrigan’s coverage of the Fenton Treatment Plant issue.

This entry was posted in Environment, Home and tagged Fenton, MSD, stlouisflood, Valleypark. Bookmark the permalink.