Lovers’ leaps, bluff areas where romance and intrigue once intertwined, are to be found all over the Midwest. However, it’s not necessary to drive 100 miles to capture the spirit of these places on Valentine’s Day.

“Emmenegger Park is a good Valentine’s Day destination because it rises on its western side to a bluff overlooking the Meramec River,” said Bob Rubright. “There are some nice vistas and rocky outcroppings for sitting.

“People once referred to the area below as Chrysler Valley because of the car factory. That’s gone,” said Rubright. “In any case, it must have been a lovelier site before the factories and Interstate 44.”

Kirkwood resident Rubright has been to many of the more distant lovers’ leap sites in the region to research his books on hiking trails. His 2002 book is “Weekend Walks in St. Louis and Beyond.” A new one is in the works, titled, “Two Feet in St. Louis and Nearby.”

Seasoned hikers like Rubright can tell you about the lover’s leap at Starved Rock in Illinois; the one at Pere Marquette near Grafton, Illinois; and the famous Hannibal Lover’s Leap in Mark Twain Country.

All of these sites require a leap of faith if you want to believe the lore about Native American lovers. These past romancers all found endless love in eternity by leaping from their favorite outdoor destinations.

In the Hannibal legend, a chief’s daughter fell head over heels for a brave from another tribe. After she ignored warnings not to see him, warriors pursued the couple up to their cliff hideaway. They embraced and hurled themselves over the edge.

The bluffs in Webster-Kirkwood probably are not steep enough to reenact the leaping lovers’ lamentable legends. On the other hand, it’s not a stretch to imagine that the Osage, who once inhabited this area, were frequent visitors to these sites.

“I don’t know much about young lovers at my tender age,” said the 70-ish Rubright. “But I do know local butterfly fans like to stand on a glade or overlook atop the bluff to wait for incoming butterflies in the spring.

“In April, the butterfly addicts see swarms of zebra and tiger swallowtails fly into the top of Emmenegger,” said Rubright. “One butterfly guy told me that he has seen more butterflies at Emmenegger in an hour than anywhere else in his entire lifetime.”

Rubright said he did not know if the butterfly guy had his wife or girlfriend with him “to romance things up.” And he also said there’s no reason to wait until April to visit the Emmenegger bluffs. February 14 is fine.

“This Valentine’s Day, my wife Lynn and I will likely walk around the lake at Simpson Park on Marshall Road near Kirkwood,” said Rubright. “That’s our go-to walk for the last 20 years. We’ll sit on one of its blue benches to catch our breath.”

If Rubright and his wife were to walk in Webster Groves on V-Day, they’d recommend the smallish five-acre Lockwood Park near the terminal end of Newport Avenue at the Big Bend intersection. The park sits aside the College School.

“The park is paved,” said Rubright. “You can walk through a small prairie with evening primroses, a shortleaf pine forest, a sycamore grove and weeping cypresses. Benches pop up along the quarter-mile walkway for lovers to discover the beauty.

Steingrubby said the bluff view at Deer Creek Park and the Marshall Trailhead may be the best approximations of lovers’ leap sites in Webster Groves.

“Witch-hazel begins to bloom below in February and can be found in Larson Park along the creek,” noted Steingrubby. “Standing on the narrow metal bridge at Larson Park, looking in either direction of the creek, is a treat for the eyes.

“The celebrated Liberty Tree is a sight to behold both at a distance, and up close, at Larson Park,” declared Steingrubby. “I hope hikers come down from the high spots and give that tall tree a big Valentine’s Day hug.”

Emmenegger Park has a lot of history to think about on a hike up the trail to the rock outcroppings. The land was once owned by Edwin Lemp, a son of the St. Louis Brewery family. He was an outdoorsman and camped atop the bluffs. 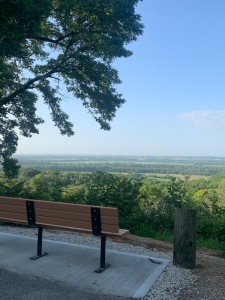 Lemp brought unusual animals to the long stretch of river bluffs and the 12,500 square-foot home that he constructed at the property’s edge. He was a friend of the Saint Louis Zoo’s George Vierheller.

The Lemp estate was bought in 1975 by noted real estate developer Russell Emmenegger for suburban homes. Emmenegger backed off from the plan after an outcry from nearby residents who loved the land and its roaming animals.

Emmenegger gave almost 95 acres of the tract to the City of Kirkwood for his namesake park. For at time, the Missouri Conservation Department assisted Kirkwood in managing the land.

Kyle Henke, Kirkwood Parks and Recreation Director, did not want to express any partiality for Emmenegger Park for this story. He also did not want to encourage any leaping lovers on the park’s bluffs.

“We encourage residents and visitors to safely take advantage of any and all of our parks,” said Henke. “They might also check out Valentine’s Day gift options at our local business to make the holiday special.”

This entry was posted in Home, Opinion, Outdoor/Nature. Bookmark the permalink.

One response to “Hey, Valentine, Ready For A Local Lovers’ Leap?”