The preliminary concept of a “night zoo” to see nocturnal animals would allow the Saint Louis Zoo and Grant’s Farm to reach more people with conservation messages and provide opportunities for people to connect with nature. Photo credit: Night Safari in Singapore

UPDATE: Article from the Webster-Kirkwood Times with more information on the Grant’s Farm possible acquisition.

Environmental Echo is ecstatic about the idea of the St. Louis Zoo establishing another presence in the St. Louis area at Grant’s Farm.

The St. Louis Zoo has been a leader on so many fronts, from promoting science education to protecting the environment. In recent years, it has been a leader in warning about the impact of climate change and the imperative of addressing global warming.

The St. Louis Zoo — what better match for Grant’s Farm? 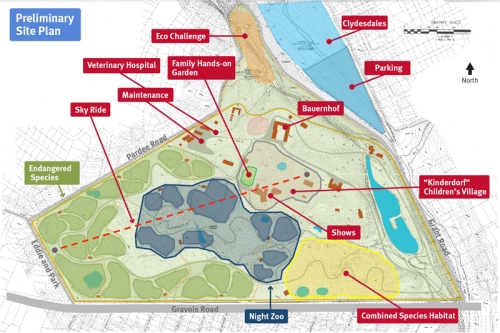 The Saint Louis Zoo Association today announced it has an opportunity to purchase Grant’s Farm from the Busch Family Real Estate Trust that owns the family attraction visited by over 25 million guests over the past six decades. The Zoo believes an expansion would allow them space for animal husbandry, research and breeding endangered species.

“The Zoo’s purchase of this regional asset provides a way to make the Zoo even stronger,” says St. Louis County Executive Steve Stenger. “Ownership and operation of Grant’s Farm by one of the world’s great zoos is the best way to ensure both the growth of the Saint Louis Zoo and Grant’s Farm.”

The sale would be contingent upon the Zoo’s ability to generate enough funding to operate Grant’s Farm in the future at the high standards the public has come to expect of both the Saint Louis Zoo and Grant’s Farm.

The cost to purchase the property from the Busch Family Real Estate Trust is anticipated to be approximately $30 million. This is expected to be largely funded by a donation from Anheuser‑Busch if the transaction moves forward. The site would be paid for by this donation—not by taxpayer revenue.

Anheuser-Busch currently leases the property from the Busch Family Real Estate Trust and has operated the attraction since 1954.  The company said the potential donation would be made to both help the expansion of the Saint Louis Zoo and to entrust Grant’s Farm’s future to the care and guidance of the world-renowned Zoo.

“The Zoo’s plan for this landmark institution involves keeping all the features that have made it a truly unique attraction for decades. We plan to make a great family experience even better with more animals and educational offerings,” said Jeffrey P. Bonner, Ph.D., Dana Brown President and CEO of the Saint Louis Zoo. “In addition, Grant’s Farm’s more than 250 acres would provide large spaces for animal husbandry, research, and breeding beautiful, majestic species that are endangered in the wild. We would provide opportunities for people to connect with nature through many new attractions that would establish Grant’s Farm as a premier regional and national institution and as an internationally recognized research and conservation breeding center.”

The Zoo’s critical need for conservation breeding space was identified through an extensive planning process involving more than 200 Zoo and community leaders and is part of the Zoo’s mission-driven Strategic Plan adopted in 2014.

Dr. Bonner said Zoo leadership firmly believes preserving this landmark institution would open up a great opportunity for the Zoo to grow and better serve the community through fun family educational experiences and the preservation of wildlife. “Many of the species protected by our Zoo and other accredited zoos will vanish in coming years unless conservation organizations find the space to increase species population sizes,” he said.

A skyride is one concept of possible additions to Grant’s Farm by the Saint Louis Zoo. ©LittlenyDreamstime.com

“If we are successful in completing this acquisition, we would begin a multi-phase effort that would involve infrastructure improvements, enhanced educational and research programs, and of course, great new visitor experiences,” Dr. Bonner added. “All this would benefit the long-term interests of the Zoo and Grant’s Farm, our mission to preserve animals, our visitors and neighbors, and the citizens of our state and region.”

Zoo leadership estimates that the Zoo would need $3.5 million to $8.5 million annually to operate the property, depending on the number of new attractions and new animal species.  The Zoo would also need additional private funding for infrastructure improvements and for the zoological management and support required. Public support, moreover, would help the Zoo continue to renovate and upgrade existing facilities on its campus in Forest Park—ongoing work that is critically important just to maintain its century-old infrastructure.

“We believe that acquiring Grant’s Farm represents a very good value,” said Matthew W. Geekie, President of the Saint Louis Zoo Association Board of Directors.  “The Zoo Association will commission a full appraisal. However, any final purchase would be contingent on the willingness of our community to help provide additional public support for operating Grant’s Farm. Most importantly, any transaction would have to be consistent with the Zoo’s mission and supported by elected officials, civic leaders and the people of the St. Louis metropolitan region.”

Holmes Lamoreux, chairman of the Zoo Subdistrict Commission, enthusiastically supports the potential acquisition, adding that the purchase could help the Zoo and Grant’s Farm remain two of the region’s top tourist attractions. “The Commission is thrilled that the Zoo Association is pursuing this purchase,” he said.  “The Saint Louis Zoo is not only a treasured institution but a major engine for economic growth in our region.”

He cited a 2014 Regional Chamber and Growth Association study showing that the Zoo provides as much as $230 million in direct and indirect economic benefits to the region annually including 330 permanent jobs and 950 seasonal jobs. Grant’s Farm has 49 full-time, year-round employees and more than 300 seasonal employees.