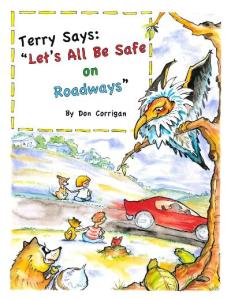 Just in time for the holidays, Terry the Turkey Vulture swoops down to give children smart tips on keeping safe around roadways. Terry’s advice also applies to children’s pets, who do need a little “coloring” in the book.

According to the Centers for Disease Control, one in every five children under the age of 15 killed in traffic crashes was a pedestrian. Kids are at risk of crash injuries, even when they are not inside a vehicle. Adults can help protect their young ones with tips about road safety.

Terry says: “Let’s All Be Safe on Roadways.” The coloring book’s message is that motorists must drive defensively and walkers must walk defensively. When you’re at a marked crosswalk, don’t assume that oncoming drivers will stop.

In 2022, St. Louis was shocked when residents were killed trying to cross Chippewa Street to get to a popular city custard stand. Pedestrian deaths are a concern for everyone. St. Louis suburbs also have lost residents to crosswalk accidents and curbside collisions.

Corrigan is author of “American Roadkill: The Animal Victims of Our Busy Highways,” which was an inspiration for the coloring book. The children’s book is being offered free at some bookshops with purchase of the “American Roadkill” book by McFarland Publishers.

Both books have received support from animal rights organizations and from traffic safety groups. These include Missouri Alliance for Animal Legislation and Safer Streets for Kirkwood and the STL Region.

The coloring book is richly illustrated by local artist Laurie Jackson and smartly produced by Jo Schaper, formerly with River Hills Traveler, a magazine for the Ozarks. She came up with the idea for Terry, known as an “Ozark Eagle.”

Locally, books are available at Novel Neighbor or Webster Groves Bookshop. (Get it free with purchase of Don Corrigan’s “American Roadkill.”) Book orders also available by contacting Don at his email corrigan@timesnewspapers.com or at 314-968-2699 for single or bulk orders.