“I try to gavel them to order, but I don’t get much respect,” admitted Dunsford. “Castor beaners are rowdy. They don’t take me seriously and they are a little wound up right now.”

WGCBS members are wound up because they’re in the heat of competition for growing the tallest castor bean plant. The stakes are high, the plants are tall – and the winner takes all. The owner of the tallest plant wins bigly.

“Tom Bush of Glendale is my ‘Chart Meister,’ and records the height of contest plants on a weekly basis,” explained Dunsford. “Members call in their heights to him and he records them.

“I don’t trust their reports,” added Dunsford. “I ride my bike all over Webster-Kirkwood with a tape measure and stop at their homes to check their castor bean plants. I do my own measurements. It’s called ‘keeping them honest.’”

Glendale’s Bush won the competition a few years ago with a 20-foot plant. Heat and drought may keep plant heights down this year, although the plants are used to a harsh climate in their native Middle East.

Dunsford said annual WGCBS dues are $5. It all goes into a castor bean winners’ pot. The winner at the end of growing season gets half the pot. They can then name a charitable cause to take the other half.

Beneficiaries in the past have included the Missouri Botanical Garden, as well as storm and hurricane victims, such as those who suffered through the 2005 Hurricane Katrina.

WGCBS meeting agendas include discussions about the leaves, flowers, beans and much more about the peculiar plants. Also discussed is the “star power” of the plants and their many uses.

Cleopatra reportedly used castor extracts to brighten the whites of her eyes. Egyptians also used the oil for body ointments and for burning in the lamps of tombs and in pyramids.

Many Americans can recall the use of castor oil as an old-time laxative. Castor derivatives also have been used for hair oils and to encourage hair growth. Castor beans have been used as a mole repellant in gardens.

Of course, much of the discussion among WGCBS contestants is about how to make their plants grow better. Full sun for at least eight hours a day is a must. Soil must be moist, but not waterlogged.

“We talk about fertilizers,” said Dunsford. “There was a rumor that Charlie Hoessle was using giraffe dung for his Castor Bean plants, which would naturally make them grow taller.

“We also had recent discussion about how our float should have won a prize at the Community Days Parade,” added Dunsford. “The judges mixed up our float up with the Webster Groves Nature Study Society float. Our float was much prettier with all our castor bean plants.”

Castor bean plants do have a reputation for beauty. The plants stand out on landscapes for their height, beautifully textured leaves and colorful pods. The red or green pods are most attractive.

When the pods dry, they will explode. The seeds trapped inside turn into projectiles when released. They can be toxic and should not be eaten by pets or by humans. A poison used in espionage, ricin, can be processed from the plant.

“I don’t think the plants are dangerous when they are just outside growing,” said Bush of Glendale. “There is a lot of plant processing that has to happen to make something like ricin. 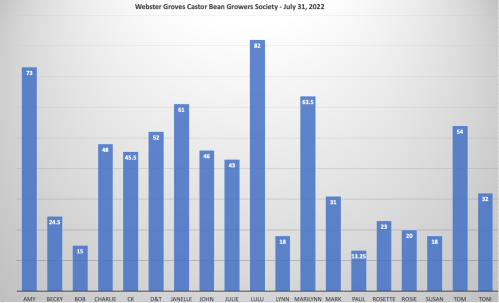 “I was a charter member of WGCBS about 25 years ago,” said Bush. “That’s when Charlie Hoessle was zoo director. He showed us these amazing plants and that’s when we started the society.

“The plant competition is all in good fun,” added Bush. “I’m in fifth place now. I have time to catch up. Lulu will set a date when we’re at the finish line and the final measurements are taken to declare a winner.”

Bush said he gets his seeds from plant stores in both Webster Groves and Kirkwood. He does not recommend one city’s seeds over another, nor one city’s climate over another for growing castor bean plants.

“I live in Glendale, which is kind of the neutral Switzerland in Webster-Kirkwood,” said Bush. “I just kind of get the best of both worlds without having to take a side.