Route 66 State Park: What A Bunch of Flowers! 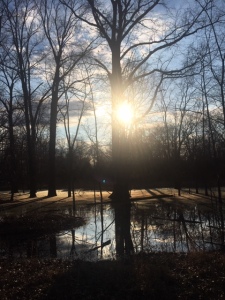 Nature often triumphs at environmental disaster sites, sometimes with the help of man – and sometimes not. There’s no
shortage of photos on the web of flora and fauna reclaiming damaged territory, such as at Chernobyl in Ukraine and Fukushima in Japan, sites where nuclear plant disasters occurred.

In Missouri, Times Beach is an environmental Superfund Site that cost upwards of a billion dollars to rescue from major dioxin contamination. In the 1980s, debates took place on whether to bury the dioxin or flush it down the Meramec River. The final solution was to scoop up and burn the dioxin-saturated ground to neutralize the contamination.

Today, the city of Times Beach is no more and the dioxin is mostly gone. In its place – on land between Fenton and Eureka, Missouri – is Route 66 State Park. A nearby visitors center is across the Meramec River from the land known for its terrible legacy of dioxin contamination.

Nature is in such abundance at the state park now, it is hard to imagine what happened at this site several decades ago. Hikers and bikers enjoy its many ponds and swamps filled with amphibians, turtles and waterfowl. The chorus of several kinds of frogs is a wonder to behold, and a welcome respite from the traffic noise of nearby Interstate 44.

The past couple of weeks, I’ve walked and rode bikes with good company in Route 66 State Park. It can attract a crowd on weekends. However, its many trails are wide enough, and the park is large enough, that you are safe and can find moments of solitude to enjoy the flowers, the water features, the plentiful song birds, and the nearby Meramec River.

I could not resist silencing my phone, while using its camera, to take pictures of a water scene, daffodils blowing in the wind,  ducks enjoying a leisurely swim, and the lovely cedars that stand like sentries in open fields and glades.

I have been a guest among the flora and fauna for many years now. I wrote about this place, with its strange history, in my 2007 book, “Show Me … Natural Wonders.” The site also found a home in my book about environmental issues in Missouri.

I also could not resist writing about it in my book about weather catastrophes in Missouri, “Show Me … Nature’s Wrath.” That’s because major floods on the Meramec in 1982 put Times Beach, now Route 66 State Park, under swiftly flowing Meramec River water. People were scared.

In 1982, cities downriver, like Kirkwood, were drawing water from the Meramec River bottom lands. Officials were very concerned that the dioxin would come downstream in the floods and contaminate resident water supplies. That is one of the problems with contamination sites — the bad stuff does not always stay put.

Nature has a way of overcoming the bad stuff over time. Humans have less resilience when they foul their own nest. It’s a lesson to think hard and long about when viewing all the beautiful daffodils coming out in the Holy Season of Spring in Route 66 State Park.

“What a bunch of flowers.” That’s what the late Richard Harris once sang about in his moving song of nature.

(Don Corrigan’s nature and environmental books on Missouri are available at the Webster Groves Bookshop in Old Webster and in downtown Kirkwood at Naturally Inspired Gifts. They also are available on Amazon.)