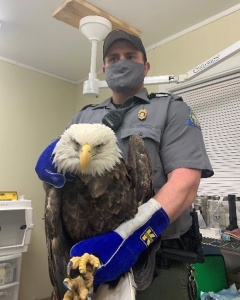 MDC Conservation Agent Jaymes Hall holds a wounded bald eagle at the Word Bird Sanctuary. MDC is seeking information from the public on the incident. Call 1-800-392-1111 to report any tips.

The Missouri Department of Conservation (MDC) is investigating the shooting of a male bald eagle near the town of Belgrade in southern Washington County. The incident occurred at the intersection of Highways C and Z and is believed to have happened on Feb. 3 or 4.

On Feb. 5 MDC Washington County Conservation Agent Jaymes Hall received a report about the injured bald eagle from the U.S. Forest Service office in Potosi. Agent Hall responded and found the male bald eagle in a field near a nest, with its mate in the nest. Conservation Agent Hall verified the eagle was seriously injured and determined it needed to be captured so its injuries could be treated. Agent Hall was able to capture the eagle with the help of Viburnum Police Chief, Hershel Shipman.

“A special thank you goes out to Chief Shipman for his assistance,” said Hall.

Agent Hall transported the injured eagle immediately to the World Bird Sanctuary (WBS) in Valley Park. WBS staff examined the eagle and found that the bird’s right wing was dislocated and severely fractured. A closer examination revealed two gunshot wounds through the joint connecting the wing to the torso. Based on the extent of tissue healing, WBS estimated the bald eagle was shot on Feb. 3 or 4.

WBS operated on the bald eagle hoping to repair its injuries and rehabilitate it. Those injuries were too extensive however, and the bird did not survive.

MDC is currently investigating the case and is seeking additional evidence that might assist in the investigation. If anyone from the public has information regarding the shooting, they are encouraged to call the Operation Game Thief hotline at 1-800-392-1111. Callers can choose to remain anonymous or be eligible for a cash reward if the tip leads to an arrest.

The American bald eagle is a protected species under law and shooting one is both a State of Missouri violation and a Federal offense.