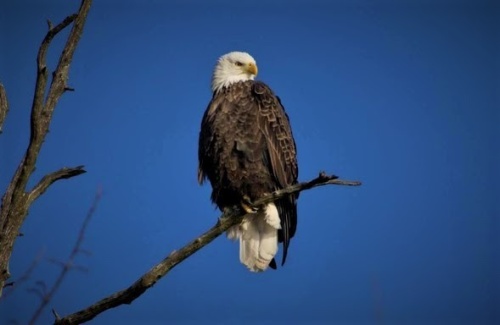 The Missouri Department of Conservation (MDC) and Dickerson Zoo in Springfield have teamed up to host MDC’s first online-only Eagle Days celebration Feb. 6. The event will be held virtually this year due to COVID-19 health concerns.

As part of this year’s Eagle Days events, Dickerson Park Zoo will provide participants with an up-close view of a live, rehabilitated eagle and peregrine falcon. Characteristics of these two birds will be discussed, and Q&A opportunities will follow each program.

Advanced registration for MDC Eagle Days is recommended: See below or (CLICK HERE).

The event is the latest example of the longstanding partnership between MDC and Dickerson Park Zoo. The program is known to raise awareness about bald eagles and is also credited with helping our national bird achieve a triumphant return to Missouri.

“A falconer himself, Paul’s interest in birds of prey led the zoo to become more involved in the treatment and rehabilitation of sick and injured eagles and other raptors that were brought to the zoo,” Crocker said.

That eventually led to a cooperative effort between the U.S Fish and Wildlife Service (USFWS), MDC, and the zoo to launch what became “a successful 10-year effort to reestablish a breeding population of eagles in Missouri,” he said.

And the rest is history.

Prior to the initiative, the history of bald eagles in Missouri had been on a downward spiral for quite some time. Historically, bald eagles nested throughout Missouri, but there were no known nestings in the state between 1965 and 1982.

That troubling statistic gave way to MDC, USFWS, and Dickerson Park Zoo coordinating efforts on a restoration project throughout the 1980s involving 74 eaglets – some of which had been born at the zoo, but most had been obtained from wild nests in Alaska, Wisconsin, and Minnesota.

These young birds were placed in artificial nests at USFWS’ Mingo National Wildlife Refuge and MDC’s Schell-Osage Conservation Area. The purpose of this was to, hopefully, re-establish successful bald eagle nesting in Missouri. This effort, coupled with improved bald eagle management in other states, has resulted in one of the greatest wildlife comeback stories.

Missouri is now home more than 500 active bald eagle nests. In winter, when the state’s resident bald eagles are joined by migrating birds from the northern parts of the continent, Missouri’s eagle population can swell to more than 2,000 birds.

Dickerson Park Zoo’s eagle care program produced three well-known eagles used in programs around the state. “Omega” was the first of Dickerson Park Zoo’s program eagles, followed by “Phoenix,” who is still being used at eagle events. The zoo also is home to “Aquila,” a golden eagle for use in programs. These birds allow visitors to get up-close-and-personal views of a live eagle and, through this experience, gain a greater appreciation for eagles.

“For a long time, Dickerson Park Zoo’s professional and dedicated staff and volunteers served Missouri’s wildlife in a mission of rehabilitation and care while providing educational programs to countless Missourians and being a great partner to the Missouri Department of Conservation,” said MDC Scientist Janet Haslerig, who helps coordinate the agency’s bald eagle monitoring efforts in the state. “This invaluable partnership with Dickerson Park Zoo and other state and federal partners has led to a remarkable conservation success story for bald eagles in Missouri.”

Learn more about bald eagles in Missouri and other eagle-related events across the state at mdc.mo.gov.

This entry was posted in Home, Local Events. Bookmark the permalink.