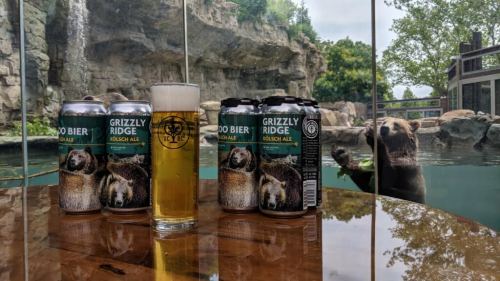 To raise awareness about the importance of animal welfare and conservation, the Saint Louis Zoo has teamed up with Urban Chestnut Brewing Company (UCBC) to create Grizzly Ridge Kölsch, the first official beer of the Saint Louis Zoo. The beer will be available at the Zoo as well as at grocery stores and beer retailers in St. Louis city, St. Louis and St. Charles counties and the Metro East area beginning June 22. For every case of Grizzly Ridge Kölsch sold at area retailers, Urban Chestnut will donate $3 to the Saint Louis Zoo to support its animal care and conservation work.

“The Zoo’s mission is to care for animals and conserve their habitats through animal management, research, recreation and educational programs to encourage support from and enrich the experience of the public,” said Jeffrey P. Bonner, Ph.D., Dana Brown President and CEO, Saint Louis Zoo. “Our collaboration with Urban Chestnut provides an opportunity for adults to enjoy a refreshing and delicious craft beer while supporting the Zoo’s conservation and animal-care efforts.”

Grizzly Ridge Kölsch is named after the Zoo’s newest habitat, Centene Grizzly Ridge. Future plans include the release of a new style of beer highlighting a different area of the Zoo in 2020.

Urban Chestnut collaborated with the Saint Louis Zoo on the beer style, name and label design. “Together, we ultimately decided to brew a Kölsch because it is a clean, crisp and well-balanced style that will appeal to a wide audience,” said Florian Kuplent, UCBC co-founder and brewmaster.

“From day one, Urban Chestnut has been committed to supporting nonprofit organizations in the St. Louis community. When the opportunity arose to partner with such an important and vital organization as the Saint Louis Zoo, we jumped at the chance,” said David Wolfe, UCBC co-founder. “We are extremely honored to be selected as their partner to develop their first official beer.”

About the Saint Louis Zoo: Home to over 17,000 animals representing approximately 600 species, the Saint Louis Zoo is recognized worldwide for its innovative approaches to animal care and management, wildlife conservation, research, and education.

One of the few free zoos in the nation, the Saint Louis Zoo attracts 3 million visitors a year and is the most-visited attraction in the region. Accredited by the Association of Zoos and Aquariums (AZA), the Saint Louis Zoo is part of an elite group of institutions that meet the highest standards in animal care as well as provide fun, safe and educational family experiences. The Saint Louis Zoo and the other AZA-accredited institutions collectively dedicate millions of dollars annually to support scientific research, conservation and education programs. For more information, visit stlzoo.org.

About Urban Chestnut Brewing Company: Urban Chestnut Brewing Company (UCBC) is an unconventional-minded yet tradition-oriented brewer of craft beer. Founded in 2010 by Florian Kuplent – a German born and trained brewmaster with extensive experience at both small breweries, worldwide and with the world’s largest, Anheuser-Busch, and David Wolfe – a 20-year brewing-industry member.