Aerial Photographs of Flooded Infrastructure in the St. Louis Region

Ameren’s Sioux Power Station at the confluence between the Mississippi and the Missouri Rivers | Photo taken on June 3, 2019 by Derek Hoeferlin. Courtesy Missouri Confluence Waterkeeper.

Dramatic photos of area infrastructure sites and information released by Missouri Confluence Waterkeeper. Everyone should be concerned about how the recent flooding events will affect the local region’s important infrastructure, such as our drinking water supply.

Informational release from the MCW starts below.

Missouri Confluence Waterkeeper Rachel Bartels and volunteer photographers captured aerial photos of the flooded Missouri and Mississippi Rivers in the St. Louis region during three flights taken between May 28, 2019 and June 3, 2019, where they surveyed the extent of the flooding and assessed how flooded infrastructure will impact the region’s clean water.

“The majority of our drinking water is from the Missouri and Mississippi Rivers, so we wanted to get up in the air as quickly as possible to document the hazards and the potential risks to our community,” Bartels said.

Among the possible hazards are ponds storing highly toxic coal ash along the Missouri and Mississippi Rivers, as well as at the confluence of these two major rivers, which have seen seven major floods since 2008 and experienced three record-setting floods in the past three years alone.

“Coal ash simply shouldn’t be stored in places vulnerable to flooding, near drinking water sources,” Bartels said. “As states like Virginia and North Carolina are reckoning with their own hazardous coal ash storage, opting for completely excavating sites and moving the ash to lined landfills outside of flood zones, it’s vital that we do the same here.”

“Our immediate goal is to inform our community about the long-term effects to human health and the environment posed by the current flooding,” Bartels said. “Our longer-term goal is to raise awareness of the threats to the drinking water we depend on, advocating for solutions that will keep our water safe for generations to come.”

Confluence of the Missouri and Mississippi Rivers | Photo taken on June 3 by Derek Hoeferlin. All photos courtesy Missouri Confluence Waterkeeper.

One of the flights was done in coordination with Waterkeeper Alliance and a partnership with LightHawk, which pairs volunteer pilots with conservation organizations. Volunteer LightHawk pilot David Warner flew Bartels and architect/photographer Tom Peterson. Other flights were coordinated privately and for Bartels and photographer Jake Trost and architect Derek Hoeferlin.

Ameren’s Sioux Power Station at the confluence between the Mississippi and the Missouri Rivers | Photo taken on June 3, 2019 by Derek Hoeferlin.

“The flooding is devastating, and it highlights our collective need to embrace the middle part of our country as a water-rich, hydro-region for the 21st century,” said Derek Hoeferlin, principal of Derek Hoeferlin Design. “It’s time to rethink how we manage the rivers for everyone’s mutual benefits.”

Missouri Confluence Waterkeeper is preparing to take water samples when the floodwaters recede and will continue to monitor waterways for toxic exposures that can harm human health and the environment.

Waterkeeper Alliance: Waterkeeper Alliance is a global movement uniting more than 300 Waterkeeper Organizations and Affiliates around the world, focusing citizen action on issues that affect our waterways, from pollution to climate change. The Waterkeeper movement patrols and protects over 2.5 million square miles of rivers, lakes and coastlines in the Americas, Europe, Australia, Asia and Africa. For more information, please visit waterkeeper.org. 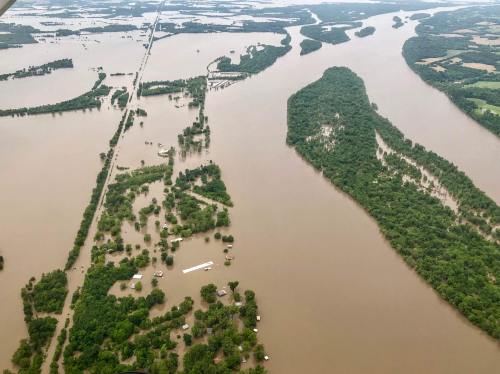 Ameren’s Meramec Power Station on the Mississippi River | Photo taken on May 28, 2019 by Jake Trost Photography. 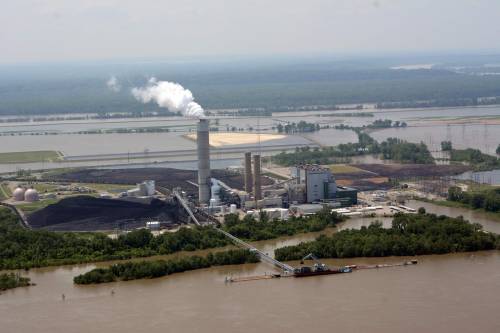 Ameren’s Sioux Power Station at the confluence between the Mississippi and Missouri Rivers | Photo taken on June 2, 2019 by Tom Peterson.

This entry was posted in Environment, Outdoor/Nature. Bookmark the permalink.