“JUST DO IT!” Is The Motto Of Fearless Kayaker Who Plans To Spend 71st Birthday On Sepik River In Papua New Guinea 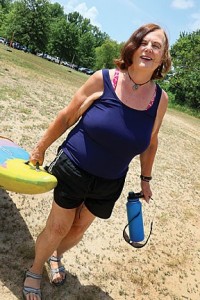 Kathy Pszonka’s next exotic water tour will be on her 71st birthday — a trip on the Sepik River in New Guinea. All photos Webster-Kirkwood Times.

Kayak Crazy Kathy Pszonka plans to spend her 71st birthday this September on the waters of the Sepik River in Papua New Guinea. She will be lodging in grass huts on her trip, so candles on her cake will remain unlit.

None of Pszonka’s friends in the St. Louis Canoe and Kayak Club are at all surprised by Pszonka’s plans to float on a wily river a half world away. They know this Fenton septuagenarian’s motto is: “Just Do It!”

When it comes to getting in the water in a kayak, Pszonka has been “just doing it” for just about a score of years. She took her first kayak lesson at age 52 and fell in love with paddling low-to-the-water in these increasingly popular, eco-friendly, canoe-like boats.

Read more about Pszonka below.

“When I got a nursing job at Barnes with better hours, I decided I would take up kayaking,” explained Pszonka. “I did terrible in my first kayak course. I took the course over again – much to the dismay of the instructor – to make sure I got it right.” 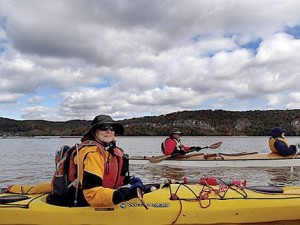 Kathy Pszonka on the Illinois River Road section of the Mississippi River. The photo was taken in 2014.

Pszonka is now helping other novice kayakers learn how to be on the water and get it right. She also leads kayak trips around the country, but she never advertises her tours. Folks on her trips are by invitation – her invitation.

“I handpick who goes, from people I know through clubs and white-water kayak sports,” said Pszonka. “The trips that I do require stamina, some proven experience, and a calm state of mind.

“I don’t want people freaking out on me on a long kayak trip,” explained Pszonka. “I can’t have people asking me to tow them, because they are all tired out. I can’t have people who are asking if they can jump out of their kayaks and swim to shore.”

One of Pszonka’s favorite tours is on Lake Superior in Wisconsin, where she said she and other kayak enthusiasts go island hopping on the Great Lake. It’s all great fun, but she concedes there can be some scary stretches on these trips near the Apostle Islands National Lakeshore Park.

“The great thing about the Apostle Islands are the amazing shorelines and caves that can only be accessed by kayak,” said Pszonka. “On the downside, there can be rough weather, waves that go over the kayaks, and some intense fog. It’s fog that can be very disorienting on the water.” 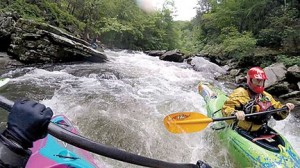 Kathy Pszonka enjoys a wild ride on the St. Francis River in Missouri.

During a score of years of kayaking, Pszonka has logged a goodly number of favorite trips. The Apostle Islands in Wisconsin are high on her list, because of the caves, arches, birds and bears, and isolated island camping areas.

Pszonka also has a warm spot in her heart for a cold Glacier Bay, Alaska. Paddling Alaska’s Inside Passage allows for close-up views of rugged mountains, glistening glaciers and wild coastlines.

“I remember eating some jerky on the shore and seeing a cruise boat go by,” said Pszonka. “I knew the people on that boat were eating a lot better than me, but I wouldn’t trade places with them. They were not seeing what I was seeing close to the water.”

On her 68th birthday, Pszonka hiked down the Grand Canyon and joined a paddle rafting expedition on the Colorado River for nine days. She said the scenery on the trip was the best birthday gift ever.

“I was told that I was too old for that trip,” said Pszonka. “You are too old if you are in your 60’s and you are not working out at the gym regularly and keeping in shape. You have to stay in shape if you have demanding hobbies.

“A thing I hear a lot is people saying they are going to do this, or that, after they retire at 65. Well, it can be too late then,” advised Pszonka. “If you plan to kayak or canoe, bicycle or hike in your retirement, you need to start doing it in your early 50’s, otherwise it’s probably not going to happen.”

Pszonka found water to paddle in Africa in Zanzibar, an ancient trading post on the east coast of the continent. Actors Bob Hope and Bing Crosby made the location famous in their movie, “The Road To Zanzibar,” but the twosome were long gone by the time Pszonka rowed in Zanzibar. 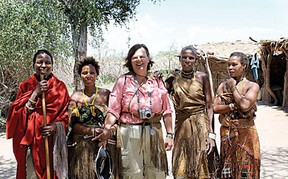 Kathy Pszonka pictured with native people of Zanzibar, a region of Tanzania. Zanzibar is an ancient trading post on the east coast of the continent.

“My daughter, Karen, went with me on the trip to Zanzibar,” said Pszonka. “The number of hippos that we saw in the water there was amazing. It was also nice to be able to stay at hotels for just $10 a night.”

Of course, Pszonka’s next exotic water tour will be on her 72nd birthday in New Guinea. She has booked this trip on the Sepik River with Intrepid Adventures. The Sepic Region is described as raw, primitive, tribal and not for the faint of heart.

“I have been told that I cannot stay on the beaches there after the sun goes down,” said Pszonka. “There are gangs of robbers there called ‘raskals’ who threaten you with machetes.”

Not Faint Of Heart

No one has ever accused Pszonka of being “faint of heart.” And if she makes it through her trip in New Guinea, she plans to detour to Australia before heading back home to Fenton on the relatively tame banks of the Meramec River. 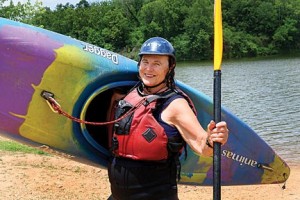 Kathy Pszonka, a member of the St. Louis Canoe and Kayak Club, during a recent outing at Simpson Lake in Valley Park.

“I want to see the Great Barrier Reef, Australia’s great natural wonder, before either it dies or I die,” said Pszonka. “Global warming and climate change have been very hard on these coral reefs around the world. We’re going to lose them.

“When you are close to the water, you really see what’s happening with climate change,” said Pszonka. “We are going backwards on the environment. We are courting disaster for short-term gain. I worry for my grandchildren. We need to care for this beautiful planet.”