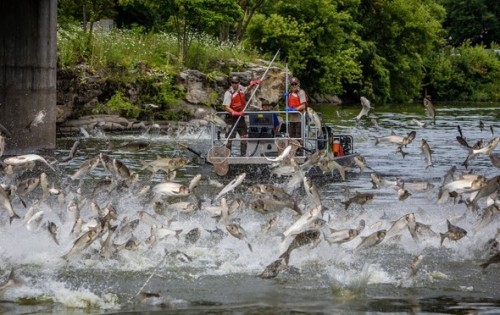 Visitors to St. Louis County’s popular Creve Coeur Lake Park may experience some temporary restrictions in using the park for a two-week period between Jan. 21 and Feb. 17.  The long-term benefit, however, should be the near-eradication of the lake’s biggest nuisance—invasive Asian carp.

Read more below from the MDC about how the carp will be removed and restrictions to lake usage during the project.

Invasive Asian carp (primarily bighead carp and silver carp) entered Creve Coeur Park Lake when the lake was flooded by the Missouri River sometime prior to 2009.  They quickly began to compete with native fish for food and space, reducing sportfishing quality.  Recent fisheries surveys and angler reports suggest white crappie fishing has declined since invasive Asian carp entered the lake.  Asian carp also cause conflicts by leaping at and striking lake users and have been the source of several nuisance fishkills.

The partnership will use a technique called the unified method, which has been adapted from proven techniques used in Asia.  The unified method involves a combination of fish herding, clearing, blocking re-entry, and driving actions using several boats, long nets, and dozens of staff.

Depending on weather conditions, the agencies will employ the effort over a two-week period between Jan. 21 and Feb. 17.  Winter conditions may concentrate Asian carp populations and limit their ability to jump over block nets, making removal efforts more efficient.   However, ice coverage on the lake will require suspension of the project until the lake clears.

Biologists will divide the lake into cells using nets.  They will herd/drive fish out of these cells with boats employing acoustic sound, localized electricity, and nets.  As each cell is cleared of fish, biologists will block their re-entry to that cell with nets. This methodical process will limit access to increasingly larger portions of the lake and push fish toward a central collection point.

At the collection point, biologists will confine all fish into a large corral with nets and then herd them into a live collection net.  They will sort the collected fish, and return native fish to Creve Coeur Park Lake while removing all Asian carp.

The project will field up to 12 boats and 50 staff each day during challenging winter conditions. Work on the lake and shore will require open access for equipment and people safety.   As a result, public access to Creve Coeur Park Lake, as well as Sailboat Cove and its surrounding area (including trails) will be temporarily prohibited over the two-week period.  If weather conditions require a change, the public closure period will be altered as well.

If most of the Asian carp are removed, biologists expect remaining native sportfish to re-establish their historic numbers and sizes.  Previously good crappie fishing should re-establish within three-to-five years.  Unable to reproduce in lake situations, the remaining Asian carp populations will dwindle.

On a broader scale, the project could demonstrate that a successful method for removing Asian carp from lake systems exists and could be ready for future use in Creve Coeur Park Lake and throughout the U.S.