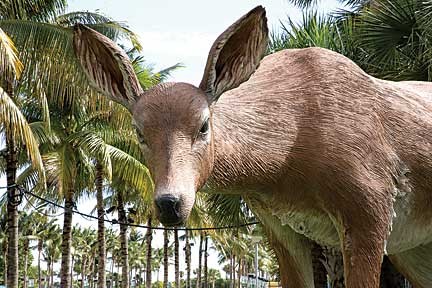 Sounds like Godzilla and the gnarly monster’s horrible progeny, but we are actually talking about white-tailed deer. Given all these scary attributes of deer, I was taken aback on a recent visit to Laumeier Sculpture Park in Sunset Hills when I happened upon an eight-foot deer.

Fortunately, this humungous deer was by itself and it was not facing the windows of the new fine arts center. Deer are known to crash through glass plate windows upon seeing their reflections and becoming confused.

In his far-less-than-fawning tale, “Deerland,” author Al Cambrone tells about a deer that crashed through a grocery window exhibiting a poster for a deal on venison. He also offers an account of a deer that died doing the same thing at a butcher shop.

Seeing an opportunity for some free advertising, the butcher told the local newspaper that “we’re so good, they’re just dying to get in here.”

White-tailed deer are the butt of a lot of jokes. Go to the web, and you will find deer puns aplenty. One of my favorites involves a Three Stooges’ skit in which Moe clobbers Curly after Curly answers the question: Does the deer have a little dough?

But I deer-gress. This column is about local deer dilemmas. In the case of the eight-foot deer at the sculpture park, I returned to Laumeier a few days later to discover the tallish deer was not alone. This time the towering stag was surrounded by doe-cents.

One of the docents directed me to public relations, where I learned the eight-foot deer is just a preview for a more substantial deer coming to the park. It’s a deer sculpture by artist Tony Tasser, who has already raised eyebrows in the park with his large bloodshot eye measuring more than 37-feet around and titled: “Eye.”

It’s yet to be seen whether Tasser’s  new deer measuring twelve-foot tall will be welcome in our area. Many deer have worn out their welcome in our neighborhoods as David Anderson of Kirkwood will attest.

Anderson has come before the city council to complain about marauding ruminants and an overpopulation of deer in Kirkwood. Some cities respond to resident deer disgust by allowing limited urban hunts to slow the growth of local deer populations.

These cities have often paid dearly in bad public relations for allowing hunts. But as Cambrone notes in his “Deerland,” the deer problem is only growing more dire. U.S. white-tailed deer now number 30 million, a 1,000-fold increase in less than 100 years.

Cambrone says nature lovers need to realize our deer herd needs to be culled and trimmed down. He asks: Do partisans for Bambi realize that such outdoor nature lovers as Aldo Leopold and John James Audubon were avid deer hunters?