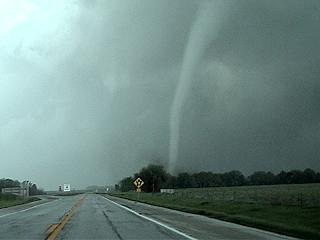 Photo courtesy James Kramper, NWS. (Tornado in the photo does not represent the Fenton, Crestwood, or Sunset Hills 2010 twister.)

Environmental Echo’s Editors Note: Starting the week of May 22, Environmental Echo will begin a series of weekly podcasts about the most destructive tornadoes to ever hit Missouri. The stories will be based on the research by Don Corrigan for his book, “Show Me … Nature’s Wrath,” and he will be interviewed by Holly Shanks of Environmental Echo. Stay Tuned.

The first tornado covered will be the half-minute hurricane that beat down St. Charles. We hope you will add to the conversation by posting your own observations about Missouri’s tornadic tales. Should Missouri be included in Tornado Alley?

Read about the New Year’s Eve Twister that hit Fenton, Sunset Hills and Crestwood below…

Missouri marked its annual Severe Weather Awareness Week this past March. Residents of Fenton,  Sunset Hills and Crestwood, who recall the New Year’s Eve tornado of 2010, don’t necessarily need a “heads up” that the skies can turn deadly in an instant.

The 2010 tornado brought 165 mph winds to Fenton, tore up the St. Paul Church and School and flipped a van on nearby Highway 141, causing a fatality. The tornado traveled onto Sunset Hills and Crestwood where it did millions of dollars in damages.

“Miracle” was a word uttered often by those gathered along Lindbergh in Sunset Hills the day after the twister. It was a “miracle” that no one had died in their city from heavy winds that caused 20 families to be displaced from their homes. Half of those homes were condemned as uninhabitable.

Ernie Rhodes, Missouri Emergency Management Agency Director, will tell you that no one should depend on a miracle to get them through a tornadic storm. Tornadoes can bring winds of up to 206 mph in an F-3 event and beyond 300 mph in an F-5 event.

“Tornadoes are a deadly threat that put lives at risk in Missouri,” Rhodes said. “If we learn about the risks and how to protect ourselves and our families, along with closely following the latest weather forecast anytime severe weather is in predicted, we can tremendously reduce the actual risk and save lives.”

Sunset Hills Mayor Pat Fibris said the 2010 tornado rampaging through her city has made an impression on residents.

“Those sirens are not for fun,” said Fibris. “I think our residents are very aware now that tornadoes can bring death and destruction. We were very fortunate in that storm that we had no fatalities in Sunset Hills.”

Fibris said that a siren on the top of a hill along Weber Hill Road is about 1,000 feet from her home. She said that if it goes off at 3 a.m., she gets the candles and the flashlight and heads downstairs for shelter.

According to Fibris, the sirens are not the only reminder of the 2010 tornado and what such a storm can do.

“Obviously, we continue to have very visible reminders of that tornado with the vacant properties at Court Drive and on South Lindbergh,” said Fibris. “Those holes in our landscape are the clearest reminder of what a tornado can do in destroying property.

“As an aside, I know that some people are upset that those lots are still empty with nothing going up,” added Fibris. “People need to know that we are being very deliberate about what goes in there so we get it right.”

On the issue of tornado recovery, Fibris had words of praise for the late Mayor Bill Nolan, who helped mobilize the community after the F-3 tornado that drove through Sunset Hills.

Nolan was out on South Lindbergh with other volunteers in the days after the tornado with boots for collecting thousands of dollars from gawkers in passing cars. The city’s Tornado Assistance Fund helped homeless residents get back on their feet.

“I think the community can be proud at how it responded to that tragic event,” said Fibris. “The mayor and residents stepped up to the plate. We can’t forget how many other communities and volunteers with outside organizations came in to give us a hand.

“I hope – I am pretty confident – that we would have a similar reaction if we are faced with that situation again in the future,” Fibris said.

Severe Weather Awareness Week is a good time to brush up on survival tips for dealing with tornadoes:

•Tornado Watch means watch the sky. A tornado may form during a thunderstorm.
•Tornado Warning means seek shelter immediately.
•The safest shelter location is an interior room without windows on the lowest floor or the basement.
•Do not seek shelter in a cafeteria, gymnasium or other large open room because the roof might collapse.
•Overpasses are not safe. Their under-the-girder-type construction can cause a dangerous wind tunnel effect.
•If you are driving, stop and take shelter in a nearby building.
•If you are driving in a rural area, drive away from the tornado to the closest building. If you cannot get away, seek shelter in a roadside ditch. Protect yourself from flying debris by covering your head with your arms, a coat or a blanket.

(The date listed in the editor’s note of April 17 has been updated to May 22 to reflect a scheduling change.)

This entry was posted in Environment, Outdoor/Nature. Bookmark the permalink.