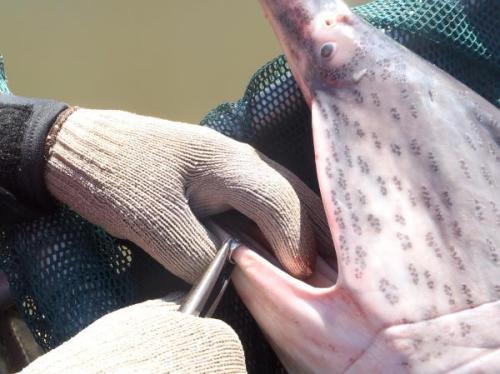 MDC is in its third year of a five-year tagging project to help monitor paddlefish numbers and improve species management. Department staff are placing metal jaw tags on up to 6,000 paddlefish netted in Lake of the Ozarks, Truman Lake, and Table Rock Lake and up to 1,000 netted from the Mississippi River. Photo by MDC Staff, courtesy Missouri Department of Conservation.

Missouri’s annual spring paddlefish snagging season starts soon! The season is a popular pastime for thousands of anglers in the state. The Missouri Department of Conservation (MDC) is in its third year of a five-year tagging project to help monitor paddlefish numbers and improve species management. If you head out to Missouri lakes to enjoy the spring paddlefish season, don’t forget to help out by reporting tagged paddlefish and to NOT remove tags from undersized or released paddlefish.

Also known as “spoonbills” because of the shape of their snouts, paddlefish take seven or eight years to grow to legal size and in Missouri can live more than 20 years. The state record paddlefish taken in 2015 on Table Rock Lake was 31 years old. The fish feed on plankton and other microscopic prey. These filter feeders therefore do not take bait from hooks and must be snagged using large hooks that catch in the mouth, gills, or other areas of their bodies.

The success of paddlefish snagging is dependent on weather conditions, primarily water temperature and flow.

“The best snagging conditions occur when water temperature reaches 50 to 55 degrees and there is an increase in water flow,” MDC Fisheries Management Biologist Trish Yasger said. “This prompts them to move upstream to spawn. We don’t usually see a lot of big fish being caught on opening day. Harvest early in the season is typically dominated by local fish and small males with the occasional large female. As water temperature and flow increase, you will start seeing more of the larger females.”

Yasger added snagging tends to be better early in the season at Table Rock Lake and better in April at Lake of the Ozarks and Truman Lake.

The Missouri Department of Conservation (MDC) makes paddlefish snagging possible in the Show-Me State through annual stocking of fingerlings raised at its Blind Pony Hatchery near Sweet Springs. The fingerlings are released into Lake of the Ozarks, Truman Lake and Table Rock Lake, plus the Black River. Last year more than 314,000 foot-long fingerlings were stocked  — MDC’s largest stocking of paddlefish. These fish will be large enough to harvest beginning in 2023. The annual stocking is necessary because dams and other barriers to spawning areas have eliminated sustainable natural reproduction in the lakes.

Yasger noted MDC released an especially large number of fingerlings into Lake of the Ozarks, Truman Lake, and Table Rock Lake in 2008. The more than 164,000 fingerlings released are now nine years old and will continue to provide good numbers of fish for snaggers to harvest.

“Without annual stocking by MDC staff, this popular pastime and food source would go away,” said Yasger. “We need help from snaggers to learn more about and to better manage this popular game fish so we can keep paddlefish snagging great for many years to come.”

Snag A Tag – Get A Reward

MDC is in its third year of a five-year tagging project to help monitor paddlefish numbers and improve species management. Department staff are placing metal jaw tags on up to 6,000 paddlefish netted in Lake of the Ozarks, Truman Lake, and Table Rock Lake and up to 1,000 netted from the Mississippi River. Yasger encourages all snaggers to help out by reporting tagged paddlefish and to NOT remove tags from undersized or released paddlefish.

“We will send a special ‘I caught a Missouri paddlefish!’ t-shirt to each snagger who returns or reports their first tagged fish,” Yasger explained. “All returned and reported tags will be placed into an annual drawing, held in July, for cash prizes with a grand prize of $500.”

Tags or photos of tags from harvested paddlefish must be submitted for rewards. Snaggers must include the following information with each tag:
– Date caught
– Location of catch including reservoir or river, mile marker, and county
– Tag number
– Fish length from eye to fork of the tail
– Snagger’s name and complete address

Report tags by calling MDC at 573-579-6825 with the information, or mail the information with the flattened tag to: Missouri Department of Conservation, 3815 East Jackson Blvd., Jackson, MO 63755 or by e-mailing Trish Yasger at Trish.Yasger@mdc.mo.gov(link sends e-mail).

Learn more about the tagging project from MDC online at http://on.mo.gov/2lr7e0b.

MDC biologists are also implanting ultrasonic transmitters in adult paddlefish at Truman Lake, Lake of the Ozarks, Table Rock Lake, and the Mississippi River to track their movements and gain other important information. MDC asks that all snaggers who harvest fish with a transmitter to report it by calling 573-579-6825 or by e-mailing Trish Yasger at Trish.Yasger@mdc.mo.gov(link sends e-mail).

“It is important to return transmitters so they can be implanted in other fish,” said Yasger.

“Do not land paddlefish with gaffs. This can fatally injure sublegal fish. Use large landing nets,” she said. “Remove hooks carefully and get sublegal fish back into the water as quickly as possible. Wet your hands before handling fish and avoid excessive handling. Do not pass them around for photos and hold fish firmly to avoid dropping them. Never put fingers in the gills or eyes.”

Unless exempt, anglers must have a current fishing permit to snag or to operate a boat for snaggers. The daily limit is two paddlefish and snaggers must stop snagging after obtaining the daily limit on Lake of the Ozarks and Truman Lake and their tributaries, and the Osage River below Bagnell Dam. The minimum legal body length for paddlefish at Lake of the Ozarks, Truman Lake, Table Rock Lake, and their tributaries is 34 inches, measured from the eye to the fork of the tail. The minimum legal body length is 24 inches on the Osage River below Bagnell Dam and in other Missouri waters. All paddlefish under the legal minimum length must be returned to the water unharmed immediately after being caught.