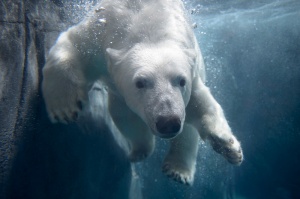 Read more from the Saint Louis Zoo Press Release about the event times and activities below.

Keepers will be conducting keeper chats and offering enrichment for the 4-year- old, 1,150 pound polar bear at 10 and 11 a.m. and 1:30 p.m. Zoo educators will be on hand throughout the day with activities to help visitors learn about the natural history, behavior and habitat of polar bears.

Interactive games will highlight polar bears’ incredible adaptations for living in their extreme Arctic ecosystem. In addition, the Zoo will offer interactive activities to raise awareness and understanding of the impact our daily actions have on polar bears’ sea ice habitat, which is melting due to climate change, and ideas on what we can all do to help.

Zoo ALIVE (Active Leaders In Volunteer Education) teen volunteers will staff a booth where they will describe their campaign to remove plastic bags from circulation. Their goal is to increase awareness of the need to vastly reduce marine debris that plagues ocean animals around the world, including polar bears.

Over the last 30 years, scientists have documented a dramatic reduction in Arctic sea ice, due to rising temperatures. Recent modeling of future sea ice trends predicts dramatic reductions in sea ice coverage over the next 50 to 100 years and the potential loss of all polar bears near the end of this century.

Sea ice is essential to the bears to hunt seals on ice floes or near breath holes since they are not fast enough swimmers to catch seals in open water. They stalk and ambush their prey on that sea ice.

When fossil fuels like coal and gas are burned, rampant carbon dioxide is released into the atmosphere, creating a heat-trapping blanket effect. The blanket is getting thicker and heat cannot get out, which is causing the earth and oceans to warm and the ice to melt. Experts say if the rising ocean temperature trend continues, Arctic sea ice will continue to melt, threatening the very habitat that polar bears and many other species depend upon for survival.

“We need to realize that all living things and ecosystems are interdependent and that ice is a necessity for polar bear survival,” says Zoo Curator of Mammals/Carnivores Steve Bircher. “Reducing our carbon footprint by cutting our energy use can slow and reverse climate change, which causes sea ice to melt. Polar bears rely on the sea ice to hunt their prey.”

“While the bears’ situation is troubling, observing Polar Bear Day is a great opportunity to harness the love we all have for these animals and to come together to make a big difference for the bears,” says Louise Bradshaw, Director of Education.

This entry was posted in Local Events. Bookmark the permalink.