The St. Louis Renewable Energy Summit, which took place at the Urban Chestnut Grove Brewery, was one of more than 50 events held across the country calling for commitments to 100 percent renewable energy. These events are part of the 100% Committed. 100% Renewable. Week of Action for Renewable Energy organized by Environment America, the national partner of Environment Missouri, The Climate Reality Project, the StudentPIRGs and others. 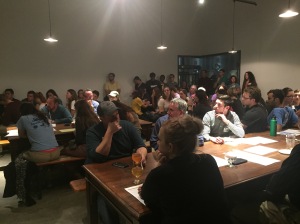 Speakers discussed the negative impacts of global warming on agriculture and public health in Missouri and  the how renewable energy can mitigate these risks. The path to achieving 100% renewable energy was also laid out. “Going forward, we ought to do as much as we can as consumers to take advantage of the tax incentives and energy efficiency programs and rebates that are currently offered through state and local government, but we also have to unify urban and rural environmental activists around holding legislators accountable at the ballot box when they refuse to take action,” said panelist Fredrick Doss

The panel also highlighted the Grain Belt Express Clean line. The project, if approved by the Missouri Public Service Commission, will double the amount of renewable energy in Missouri and support more than 1,500 Missouri jobs, including high-paying construction jobs.

While the tone of the panel was serious, attendees left the the event with hope for the future and a desire to take action. “The speakers made it very clear that this issue is of great importance and that great change is needed now if we want to combat the negative effects of global warming,” said Saint Louis University student Stephen Wald.  “I am energized and eager to pursue change,” he concluded. Other students expressed their desire for 100% renewable energy if the form of colorful signs. Climate change is the one issue we don’t get a redo on, read one sign.

“The public is increasingly enthusiastic about moving forward towards 100 percent renewable energy,” said Taylor Hale. “We are excited to work with local, state and national leaders to move America toward a clean and renewable future.”

This entry was posted in Environment. Bookmark the permalink.