Environmental Protection Agency (EPA) grant allows local environmental remediation job training for many that, in some cases, may not have received a second chance.

This past October, St. Louis Community College (STLCC) received a grant from the EPA’s Environmental Workforce Development and Job Training program in the amount of $192,300. The grant, which must be applied for, has been awarded several times to STLCC in the past years, according to Rene Dulle, project manager with the STLCC Division for Workforce Solutions Group.

Dulle said anyone interested is eligible to apply for the program. Environmental remediation is also one industry that may hire individuals who have a felony on their record. She said opportunities are often limited for those individuals.

“This can literally be a life-changing program for many people,” Dulle said.

The grant provides funds for six classes total and allows 90 individuals to attend the training program. Each six-week class contains up to 15 students. Classes started January 4, 2016, with additional classes starting in February and in April. The class schedule repeats itself in 2017. Dulle said the grant funding lasts three years – two years of classes and one year of follow-up with participants.

The program is a partnership between STLCC and Saint Louis University (SLU). The grant is awarded to STLCC, and the training is provided at the SLU Center for Environmental Education and Training (CEET).

Dulle said STLCC does all of the recruitment and screening for the program participants. The program training and materials are provided at no charge and can create a lot of interest. For the January class, Dulle spoke with an initial 65 people and out of those, scheduled around 40 for individual and group meetings. She then continued to narrow the potential students to the required 15.

The recruitment process consists of elements such as, a reading test, team communication activities, drug testing, and past experience with hands-on work, like construction, remodeling, and physical labor. Dulle said environmental jobs can be “very physical.”

“It’s our job to ensure that the people placed in the classes really want to be there, and are dedicated and motivated to complete the program,” Dulle said.

Graduates of the program will receive 20 different certifications and be eligible for asbestos and lead worker licenses in the state of Illinois and Missouri. The state licenses, which are granted at Illinois and Missouri’s discretion, are contingent on students individually meeting all requirements, according to Dulle.

During program training, students also take field trips to local environmentally effected areas. Dulle said students visit sites like the Route 66 State Park, also known as Times Beach. The area is a former community bought out by the EPA due to high levels of the carcinogen dioxin discovered in the soil. In the 1970s, roadways were sprayed to keep dust down, but the spray used contained dioxin, the same chemical also used in Agent Orange, according to “Environmental Missouri,” a book showcasing environmental issues in Missouri. 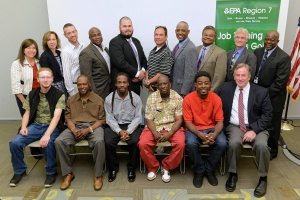 The May 2015 graduating class. Also pictured is Rene Dulle, an EPA representative, and the Director of CEET. Photo provided by Rene Dulle.

Dulle said the program success rate is high. It has a good retention rate and around a 90 percent placement rate. She said some of the jobs are project dependent.

Algee said she heard about the program from a friend. She graduated in 2010 and started All-in-1-Environmental Services, LLC. She said her company has done work for areas such as, the City of St. Louis, St. Louis County, and individual homeowners.

Algee said she has hired over 50 people from the program for work such as, asbestos and lead abatement, and HAZWOPER. She said she would recommend the program to others.

Dulle said she receives phone calls from former graduates thanking her for the opportunity and telling her how the program has changed their lives.

To learn more about the STLCC and SLU training program, visit www.stlcc.edu/EnviroTech