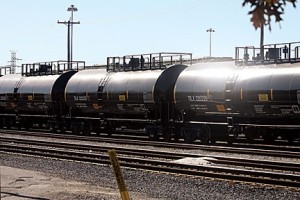 Tim Christian, from the St. Louis for Safe Trains organization, is the interview guest with Don Corrigan on this edition of “Behind the Editor’s Curtain.”

Christian was one of the sources in a recent Webster-Kirkwood Times article by Don Corrigan, “Moving Oil Over The Rails.” The article is posted below.

In this weeks, “Behind the Editor’s Curtain” podcast interview, Christian tells Don why the St. Louis for Safe Trains community organization formed, the organization’s concerns, and their solution ideas for the rail cars traveling close to Christian’s neighborhood.

To hear the podcast click on the video below.

“Moving Oil Over The Rails”

Webster Groves Mayor Gerry Welch said she is hearing resident concerns over an increase in tanker rail cars coming through the city.

Also under scrutiny are tanker cars sometimes parked on the rail line that parallels Interstate 44 near Frisco and Garden avenues.

“I’ve sent photos of tanker cars parked behind the Webster University dorms to people I know in the rail industry asking them to identify what they are carrying,” said Welch. “It’s frustrating because local and state officials don’t have much of a say in what goes on with interstate transportation.”

The sighting of more tanker cars coming through the St. Louis area is no optical illusion. It’s all part of the crude oil and hydraulic fracturing oil boom. It’s a boom that has driven gasoline prices at the pump down to below $2 per gallon in some locations.

The oil boom has put many more tanker cars on the rails. In 2007, there were about 6,000 rail cars in the United States carrying crude oil, according to the Association of American Railroads. By 2013, the number of cars carrying crude oil jumped to 400,000, a hike of more than 6,500 percent.

Experts say that even with the current oil glut, the business of moving oil will continue. The United States is now a world leader in oil production and destined to remain so for years to come. That means more tanker cars on the rails – and it also increases the potential for serious train accidents.

Since 2010, a series of tanker car trains accidents have alarmed rail safety experts. The worst was in 2013 when a train carrying Bakken crude exploded in Quebec Province in Canada resulting in 47 fatalities.

Closer to home, a tanker train exploded north of St. Louis near Galena, Ill, in March of this year. More than 100 cars derailed and the fires went on for days. Fortunately, the accident was in a rural area and there were no reported injuries.

“I listened to the trains group and I am encouraged Chief Jenkerson did so as well,” said state Sen. Joe Keaveny of St. Louis. “The chief did some negotiating with the railroads. They agreed to only transport what are called ‘residuals’ through neighborhoods.

“These ‘residuals’ are cars that have been emptied,” said Keaveny. “But that means they can still be 10 percent full. I think oil at that level could still pose a threat in an accident situation. The tanker cars used now are being replaced or upgraded for safety in crashes. The question is whether that is happening fast enough.”

The target date for retrofitting or replacing 30,000 of the nation’s oldest tanker cars – which have been likened to “Pepsi cans on wheels” – is in 2019. That’s not soon enough for Tim Christian of St. Louis for Safe Trains.

“We’re pleased that full tank cars are being routed around our area of Holly Hills, and we thank Fire Chief Jenkerson for talking with Union Pacific and helping us out on that,” said Christian. “But we will continue to monitor this situation, because it is a long-term issue with oil tanker cars.

“We would welcome folks from the Webster Groves area to join our safe trains group,” added Christian. “When these oil trains have accidents, they can be cataclysmic. “We are starting a Facebook page for concerned residents. We have about 70 or 80 members.

“We would like to have members watching what is happening on the rail lines all through the St. Louis area,” added Christian. “It takes citizens paying attention and speaking out to get change when it is needed.”

Christian said that from his own research, he is as concerned about the fracking oil traveling by tanker car as by the thicker Bakken crude that blew up in Canada. He said the thinner oil covers more area, faster when it spills in an accident and can present a greater fire hazard.

State Sen. Scott Sifton, D-Affton, said he is looking into potential rail hazards from the shipment of oil tanker cars through his district.

“I am concerned about this,” said Sifton. “There are several miles of rail line adjacent to residential areas throughout the communities I represent, including Webster Groves, Kirkwood and Affton.

“The City of St. Louis and certain railroads recently agreed that oil cars would carry only limited loads,” added Sifton. “My office is working to determine the implications of that agreement for Webster Groves and neighboring communities. While we hope the agreement reached by St. Louis will resolve the issue for Webster, we are not assuming as much.”

Association of American Railroads officials say it’s unlikely that any rail operation would agree to reroute tons of cargo to meet the concerns of a given municipality. In fact, a spokesperson for Union Pacific said rail operations have not been altered for the city of St. Louis or anywhere else because of concerns over tanker car cargo.

“Union Pacific representatives met with Chief Jenkersen several times to discuss his concerns and educate him on our operations in the St. Louis city area,” said Union Pacific’s Calli Hite. “Despite recent reports, in the course of these conversations we never agreed to alter railroad operations in any way.

“Union Pacific is a critical link in the U.S. supply chain, providing transportation of the products that power our country—including crude oil,” Hite added. “We take our legal and societal responsibilities under the common carrier law very seriously, and we strive to fulfill our duty with maximum safety and efficiency.”

Webster Groves Fire Chief Mike Capriglione said fire officials throughout the area are concerned about hazardous materials coming through the region. He said they also are aware of how volatile the oil is that was involved in fiery crashes in Canada and Illinois.

“I have seen those tanker cars with crude oil parked on a siding in Webster Groves, but I don’t monitor rail sidings regularly,” said Webster Groves Fire Chief Mike Capriglione. “I know the city rail yards backup with traffic, which means cars will sit on sidings in our area – and they are probably safer when they are just sitting.

“I would like to see some changes in what is happening,” said Capriglione. “The railroads tell us that the key to safety is track quality, and they are on top of that. They also say the strength and integrity of the tanker cars is being improved. That certainly needs to happen in light of the incidents with extremely flammable cargo.”

“We have tracks from the yards coming through Shrewsbury along I-44 and tracks that cross Watson from the yards,” said Buss. “We’ve had a couple of derailments in the past decade, but they did not involve hazmat situations.

“The railroads don’t give us access to the manifests on what is coming through on the trains,” said Buss. “I can say that they have enormous response capabilities in case of accidents. We train with them every so often. I feel they are very pro-active.”

This entry was posted in Environment, Home, Podcasts. Bookmark the permalink.