The United States is facing a challenging time. The simple task of going to the grocery store has become stressful for many as bare shelves, empty meat cases and rationing have greeted frustrated shoppers.

But this is not the first challenge our society has faced when it comes to food and supply shortages. During World War II, our parents and grandparents faced even harder situations and within longer periods of time.

Ordinary citizens were encouraged to grow gardens in backyards, vacant lots, rooftops and any available unused accessible areas. They were dubbed “Victory Gardens” and according to a story in the Farmers’ Almanac, there were tens of millions of “Victory Gardens” planted during WWII, which produced millions of tons of fresh veggies and fruits to help combat food shortages.

Now, a slew of information is currently being published about a possible resurgence of interest in “Victory Gardens.”

END_OF_DOCUMENT_TOKEN_TO_BE_REPLACED

Pope Francis delivered a controversial message during Holy Week that will have people in and outside the Catholic Church talking long after Easter passes. Conservative critics of Pope Francis have warned that he should stay in his lane – a strictly religious lane – but he has become more outspoken with the crisis of the 2020 Coronavirus Pandemic.

“There is an expression in Spanish: ‘God always forgives, we forgive sometimes, but nature never forgives,’” Francis said in the interview published April 8. “We did not respond to the partial catastrophes. Who now speaks of the fires in Australia, or remembers that a year and a half ago a boat could cross the North Pole because the glaciers had all melted? Who speaks now of the floods?

“I don’t know if it is nature’s revenge, but it is certainly nature’s response,” Pope Francis added. “Every crisis contains both danger and opportunity: the opportunity to move out from the danger,” he said. “Today I believe we have to slow down our rate of production and consumption and to learn to understand and contemplate the natural world.”

Francis became the first pope in Catholic Church history to devote an entire encyclical to the issue of care for the environment, in which he condemned human exploitation of nature.

END_OF_DOCUMENT_TOKEN_TO_BE_REPLACED

Book Review: The Great Influenza: Epic Story of the Deadliest Plague in History

True, as the book explains, a pandemic almost by definition is never expected. The response always begins ad hoc as bits of the story pop-up – along with a lot of red herrings and confusion.

Yet, the overall situation mimics past events. Instead of remembering what had been learned, alas, a thousand wrong decisions recreate the same mistakes.

Nature: A Refuge in a Pandemic Age

On a hike in the age of pandemic this past weekend, an acquaintance noted how the sky has not been this blue since the week after 9/11. There is minimal air traffic, so the skies get a breather from the burning jet fuel, contrails and all the airliners’ heat-trapping gases.

Don’t get me wrong. This column is not about the Green New Deal and its plans for the likes of Southwest or American Airlines. I’m a believer in keeping the skies friendly for air travel, at least until my daughter gets home from Dublin, where she says she is working in a “Shelter-in-Place  Paradise.”

This missive is actually about how we are now taking refuge in nature. We are discovering purple wildflowers, blooming dogwoods and pondering “nothing but blue skies,”  as Willie Nelson sings.

END_OF_DOCUMENT_TOKEN_TO_BE_REPLACED

It’s painful for Environmental Echo to receive the notices of closings and cancellations of nature outings, green activities and environmental meetings due to the coronavirus pandemic that now affects the St. Louis area and more than 140 countries.

This spreading disease is deadly serious, environmentally destructive and totally global in consequence. Obviously, it was mistake for the administration to fire the Centers for Disease Control and Prevention’s Pandemic Response Team two years ago.

It might be time to reconsider the firing of that unit, as well as the quashing of the annual reports out of the U.S. Defense Department on “Preparing the United States for Impacts of Climate Change,” which were started in 2013. Those reports include information on pandemics.

END_OF_DOCUMENT_TOKEN_TO_BE_REPLACED

To Arms! For U.S. Gray Squirrels!

Funky Winkerbean’s cartoon creator,  Tom Batiuk, is  on a roll about squirrels. Hundreds of readers sent me his comic strips on squirrels.  Actually, more than hundreds – enough people to fill up the  National Mall on Inauguration Day!

Funky Winkerbean may be tickling people’s fancy with this comic squirrel subterfuge, but the actual truth about the American Gray Squirrel is no laughing matter. So, let’s get on it.

Headlines in Britain now are all about the Royals’ big crisis and strife involving the Queen, Prince Harry and Meghan Markle. It’s a hoax, folks. The headlines are a smokescreen. The stories should be about Prince Charles and his war against American Gray Squirrels. It’s a dirty little war. It has taken an ugly turn.
END_OF_DOCUMENT_TOKEN_TO_BE_REPLACED

Posted on March 6, 2020 in Nuts About Squirrels, Opinion, Outdoor/Nature 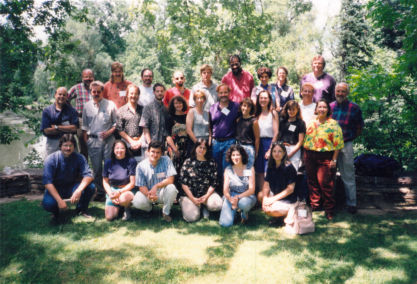 Environmental Echo applauds the Society of Environmental Journalists (SEJ) on the organization’s 30 years of advocating for nature, ecology and the environment.

EE’s Don Corrigan was in Boulder, Colorado, with SEJ when the organization debated its vision, mission and objectives. He has attended its annual conventions, which always are highlighted by field trips and a week-long intensive foray into nature to explore vital issues. He has been active with SEJ’s college teaching committees on environmental teaching and coursework. (Corrigan is pictured in the middle row – second from left.)

END_OF_DOCUMENT_TOKEN_TO_BE_REPLACED

Posted on February 28, 2020 in Environment, Opinion

A Billion Animals Crying Out Loud

I like a good bumper sticker and, “Fur Crying Out Loud,” is very effective. It is a statement against cruelty to animals and the message stays with you.

It especially stayed with me in 1981 after I wrote a feature story for our paper about the “Kirkwood Trapper.” People for the Ethical Treatment of Animals came up to my office, while I was at lunch, and plastered my desk with “Fur Crying Out Loud” bumper stickers.

What kind of adhesive was on those stickers? It took me months to scrape the suckers off my desk. In the meantime, I read the articles the PETA folks left behind about steel-jawed traps and the suffering of raccoons, beavers and rabbits – and a few family pets –  that all had their legs stuck in jagged traps.

The PETA articles were reasonable enough, but the group’s guerrilla tactics seemed a little extreme. I continued to think along those lines, and was no more sympathetic, even when nude female models paraded the streets proclaiming: “We’d rather go naked than  wear fur.”

Is this really necessary?

END_OF_DOCUMENT_TOKEN_TO_BE_REPLACED

It’s worth a trip to Branson this holiday season to take in that Christmas Classic, It’s A Wonderful Life, as performed on stage at Silver Dollar City.

This time of year, Branson is full of lights and color and holiday cheer. And Silver Dollar City has a Christmas Parade that’s perfect to cap off a day of entertainment that includes, It’s A Wonderful Life, and other great shows.

Frankly, the live theatre production of It’s A Wonderful Life at Silver Dollar City breathes new life into a movie that airs too frequently on television this time of year. It’s so refreshing to get a new, musical take on what is admittedly one of the most critically acclaimed films ever made.

Celebrated director Frank Capra referred to the film as his personal favorite of all his movies. Jimmy Stewart, Donna Reed, Lionel Barrymore and Henry Travers all deliver memorable performances in the Capra favorite – and the ensemble in Branson lives up to their legacy.

END_OF_DOCUMENT_TOKEN_TO_BE_REPLACED

Posted on December 6, 2019 in Local Events, Nuts About Squirrels, Opinion

Eco-anxiety is intense anxiety about ecological disasters and threats to the natural environment. These threats include increasing pollution and climate change disasters, ranging from floods to storms to wildfires. Variations to the definition exist such as the broader description explaining it as the worry caused by concerns about the present and future state of the environment. and planet earth.

EE’s Don Corrigan, author of  the book, “Environmental Missouri,” recently wrote about the eco-anxiety of students in a guest editorial he was invited to write for the Webster University Journal. The link to his response to eco-anxiety is provide below:

Here’s a link to his timely op-ed: http://websterjournal.com/2019/11/19/in-praise-of-brave-students-and-teachers-who-love-our-planet/