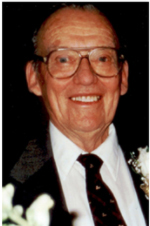 Talk to J. Marshall Magner and the first thing he would do is disabuse you of any misconception that all insects are bugs. Conversation would often proceed from there and soon was likely to fly over the average human’s head. A frustrated Magner sometimes relied on large models of insects with detachable abdomen, thorax and head to make his scientific points.

When Magner was born in northwest Webster in 1913, the area was woods, farms and a few homes. Young Marshall was in the habit of collecting insects, frogs and snakes on the way home from getting milk from the Smith’s cows in the morning. Sometimes critters got loose in the house. In his teens, he hunted and roamed the woods as far north as Olive Street Road. St. Louis County was still largely rural in his early days.

Magner’s outdoor interest and insect love led him to a career with the U.S. Department of Agriculture. In the military in World War II, he served in Europe and Africa. Later, Magner landed with Monsanto Company and he studied insects worldwide, sometimes on long stints in Central America. He shared his collecting skills and knowledge with the youngsters when he returned to Webster Groves. This garnered him the honor of the naming of Larson Park’s children’s playground as “Marshall Magner’s Bug Kingdom.”

The king of bugs had insects all over his home, but his wife Ernestine was relieved that most of the swallowtails, grasshoppers and beetles were in display cases. Magner was president of the Webster Groves Nature Study Society from 1947 to 1949 and headed its Entomology Group from 1984 until 1998. Well into his 90’s, he made field trips throughout Missouri, one time on a trip to Taum Sauk Mountain in search of the elusive orange butterfly known as the gorgone checkerspot.

Environmental Echo will periodically single out outdoor / environmental heroes who have made a difference in the St. Louis area and beyond. Many of these individuals hail from the Webster Groves – Kirkwood area, where writer Don Corrigan is Editor Emeritus of the weekly Webster-Kirkwood Times. Corrigan is the author of Environmental Missouri by Reedy Press.