Environmental Echo will periodically single out outdoor / environmental heroes who have made a difference in the St. Louis area and beyond. Many of these individuals hail from the Webster Groves – Kirkwood area, where writer Don Corrigan is Editor Emeritus of the weekly Webster-Kirkwood Times. Corrigan is the author of Environmental Missouri by Reedy Press. 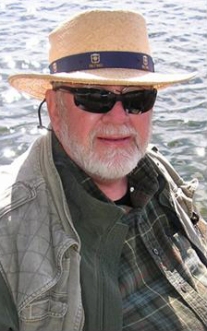 Who says environmentalists are all stuffy, humorless, killjoys? Jack Lorenz, who went to Webster Groves High School in the Happy Days era, enjoyed 1950s fast cars, fish stories and cutting up. He sometimes wore a monster mask he called “The Face.” He wore it while in the front seat of buddy Cy Perkin’s car. At a stop light in South St. Louis, they spied Stan the Man in the car next to them. Musial cracked up when “Jack The Face” rolled down the window to let out a hearty, “Hi, Stan!”

No big surprise that Lorenz coached football, basketball and baseball at a prep school while majoring in journalism at the University of Tulsa. He later joined the PR team of Falstaff Brewing, “America’s Premium Quality Beer,” a favorite of another WGHS alumnus named Harry Caray. While hustling Falstaff, Lorenz started a river clean-up campaign and helped create the “Pitch-in” anti-litter campaign.

A growing interest in outdoors lured the lifelong fly fisherman to move to Washington, D.C., to become editor in 1973 of Outdoor America, the magazine of the Izaak Walton League. A year later he was named executive director of the League, a post he would hold for 18 years. During his tenure as CEO of the League, he was asked to the White House to advise Presidents Ford, Carter, Reagan and Bush. This was in the halcyon days of the environmentalism, when most politicians saw clean air and water, protection of parks and wilderness areas as winning issues.

The League was the perfect fit for a fisherman like Lorenz. The group was named for the “Father of Flyfishing,” Isaac Walton, who published, “The Compleat Angler” in England in 1653. Established in 1922, League has had tens of thousands of members committed to protecting the outdoors.

At the League, Lorenz started a Save Our Streams Initiative, an Outdoor Ethics Program, and championed fishing practices like “Catch and Release,” before that phrase was hijacked by anti-immigration forces.