Working Together To Save Missouri’s Bats

The race is on to find solutions and inform the public about a disease killing millions of bats in the United States – White-Nose Syndrome. The disease continues to spread and has been reported in 25 states, including Missouri. 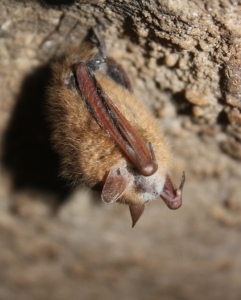 Some of Missouri’s bat species are in trouble and the event, Midwest Bat Fest has been established to help inform the public about White-Nose Syndrome (WNS). The disease infects hibernating bats and has a 90 to 100 percent mortality rate. Since its discovery in a New York cave in 2006, Bat Conservation International (BCI) reports that 5.7 million bats have died.

This year’s Midwest Bat Fest will have African straw-colored fruit bats on display along with other bat related exhibits and activities. The event is a collaboration between the World Bird Sanctuary, Onondaga Cave State Park, Missouri Department of Conservation (MDC), Missouri Bat Census, Onondaga Friends Association and the Missouri Department of Transportation. Dates for the 2015 event are April 11 and 12, located at Onondaga Cave State Park in Leasburg, Mo.

WNS is caused by a fungus, Pseudogymnoascus destructans, which can infect bats with a white fungal growth that forms on their faces and wings. Infected bats awaken from hibernation more often, which depletes their winter fat reserves. The bats may show abnormal behavior, like flying outside in midwinter. This can cause the bats to freeze or starve to death, according to BCI.

The disease has been reported in 25 states across the U.S., and five Canadian provinces and it continues to spread. The fungus was detected in Missouri in 2010 and the first “fully developed” case of WNS was confirmed in March of 2012. The MDC reports that seven of the more than 12 resident bat species in Missouri are vulnerable to WNS infection.

To see a U.S. map showing the spread of White-Nose Syndrome CLICK HERE.

Tony Elliott, a resource scientist with the Missouri Department of Conservation, said drops in bat populations are beginning to be seen in Missouri. Two examples are Onondaga Cave, which had a peak of 300 northern long-eared bats, but this year Elliott reports seeing only two or three. The second example is the cave located on Fort Leonard Wood in the Southern part of Missouri. The tri-colored bats living in the Fort Leonard Wood cave went from almost 1000 to less than 200. The drops are specific to individual caves and each cave can be in different stages of the disease.

One of the first signs of WNS infection is an increase in visible bats, according to Elliott. He said bats will move closer to a cave’s entrance and the white fungus can usually be seen growing on the bats at that time also.

Elliott said once infected bats come out of hibernation they have a chance to survive. “If infected bats can survive to the spring emergence period in good enough shape,” Elliott said. “They can clear the fungus.”

All of the MDC’s approximately 290 caves are closed to the public. Missouri State Parks (MSP) wild caves, which are caves not frequently visited by the public, are also closed with limited access. However, the more popular tourist caves, like Onondaga cave, are open seasonally. A large percentage of Missouri’s caves are located on private land. Access to private caves is at the discretion of the owners.

Caves are being closed in an effort to slow down the spread of WNS. It is believed the fungus can be spread between caves not only by bats, but by human visitation. At this time, WNS is not known to infect humans. Officials are asking all cave explorers to use decontamination procedures, including decontaminating or changing clothing, footwear and equipment when entering different caves. Limiting access will also help prevent additional disturbances to bats during hibernation periods.

Elliott said for the most part people have been cooperative with the cave closures and there has not been a massive amount of violations. However, the closures have affected the activities of caving clubs and cave enthusiasts.

“We’ve tried to maintain a cooperative effort with the cavers. We know that they are being impacted by (the closures) as far as being able to go in and do the things they enjoy doing,” Elliott said. “They have always contributed a lot to our knowledge of caves, so we’ve worked with them to look for different opportunities where they can do some counts or report new sites and things like that.”

Meramec Valley Grotto (MVG) is a non-profit St. Louis caving organization. It is a chapter of the National Speleological Society and a member of the Missouri Speleological Survey. The group consists of around 60 paid and active members and they meet monthly at the Alpine Shop located in Kirkwood, Missouri.

Larry Abeln, MVG president, has been caving for over four decades and describes his group as knowledgeable, experienced and passionate about caves. He said prior to WNS most caves were accessible and permits were easier to obtain, but things have changed. Permits are granted less often and usually are for research purposes, like mapping and bat counting.

“There is plenty of caving to do, but you have to follow the rules and protocols,” Abeln said. “You need to be involved with an established (caving) organization to do that.”

Abeln said the group had to get creative and provide more cave-related outings to help maintain interest, such as sink hole clean-ups, vertical rope training workshops, involvement in cave rescue training, and group picnics and outings.

Elliott said advancements have been made since the fungus was discovered in 2006. In states where bat population drops happened quickly, like New York and Pennsylvania, the fungus could not be detected before visible signs appeared on the bats.

“We have new tools to detect the fungus before we can see it growing,” Elliott said. “Genetic markers have been developed where we can (test) bats that are not showing any signs of the disease.”

Attempts are being made to find treatment options. Elliott said there is still much that is unknown about the disease itself, like exactly how and when it affects the hibernating bats. Projects involving different bacteria are currently being studied. He said there is one compound produced by a soil bacterium that seems to inhibit growth of the fungus, but any potential options are still in the research stages.

Research funding comes from different public and private sources. The U.S. Fish and Wildlife has funded quite a few studies and several private entities as well, such as caving organizations and Bat Conservation International, according to Elliott.

Elliott said he has seen a positive outcome with the process to form a cooperative action plan. “The good thing about it is we’ve brought together a lot of different partners, the caving organizations, private cave owners and commercial cave owners to talk things over,” Elliott said. “We’ve had some really good communication.”