Take a tour of Prairie Star Restoration Farm, between Bland and Belle, Mo., and you’re likely to get an earful from landowner Bruce Sassmann. Yeah, some of that earful will be a load about composting, but a lot of it will be quotes from his conservation idols.

Sassmann loves conservationists and has built guest shelters on the property that are replicas of historic haunts of Henry David Thoreau, Aldo Leopold and John Muir. Thoreau’s house on Sassman’s farm even includes a pond – think Walden Pond. 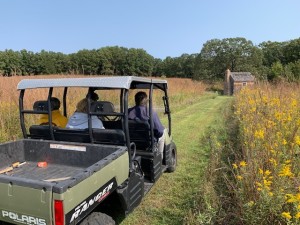 A tour of Prairie Star Restoration Farm will take you past fields of wildflowers on the way to the replica cabin of Henry David Throeau on Walden Pond.

As you approach the Leopold site modeled after the original shack in Sand County, Wisconsin, Sassman will start quoting the famous conservationist in a low whisper. Sassman is kind of a conservation whisperer.

“We abuse land because we regard it as a commodity belonging to us,” begins Sassman, with his low Leopold recitation. “When we see land as a community to which we belong, we may begin to use it with love and respect.”

According to Sassmann, “If I picked only one Leopold quote to savor, I think Aldo would approve of that one. Aldo Leopold is my conservation hero. He weaves his philosophy and ecology into poetic science.” 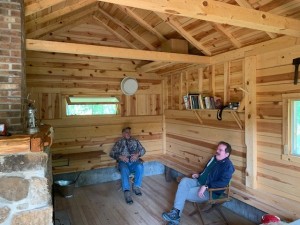 It’s a treat to sit in the cabins and listen to the recitations of Bruce Sassmann at Prairie Star Restoration Farm where he might inform you: “You are a child of the universe, no less than the trees and the stars; you have a right to be here.”

As a worthy example of prose from “Marshland Elegy,” Sassmann tells Leopold’s story of the crane. It goes like this:  “When we hear his call, we hear no mere bird. We hear the trumpet in the orchestra of evolution. He is the symbol of our untameable past, of that incredible sweep of millennia which underlies and conditions the daily affairs of birds and men.”

He started a timber stand project to restore the woodlots. A small lake was drained and improved. A 1926 barn was converted to an events venue and living space. Cattle were moved and frequent fires became the principle land management tool.

An assortment of folks, for a variety of reasons, began visiting the restored farm. A decade ago, it became a venue for conservation tours, land management workshops, wildlife restoration projects, picnics and family reunions. 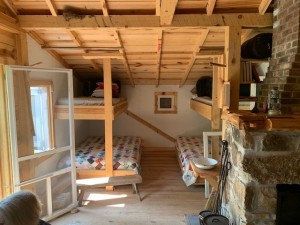 Visitors to the Prairie Star Restoration Farm will find living quarters with bunk beds that were not available at Leopold’s original shack in Sand County, Wisconsin.

“One thing we were missing on the farm was a place for people to stay,” said Sassmann. “My wife, Jan, and I considered dormitories, but we settled on the idea of building a couple of historic replica cabins.

“The Thoreau Society gave us plans for Henry David Thoreau’s house on Walden Pond,” Sassmann noted. “With the help of Gary Loeb and the Leopold Foundation we secured plans for Leopold’s Sand County shack. We thought John Muir needed to be recognized on the farm, so as soon as the cabins were finished, we set up a wall tent to recognize that conservation giant.”

Thoreau, Leopold, and Muir, known as the holy trinity of conservation, now have a home on the Sassman farm. Their presence completely shifted the event planning and purpose. The farm became all about conservation and prairie restoration education.

A Shack And A Pond

As you enter the Leopold structure, you can see it’s a likeness, of the original Sand County, Wisconsin shack. A creek, not a river, runs behind the Missouri version. The magnetic orientation of both shacks is the same. 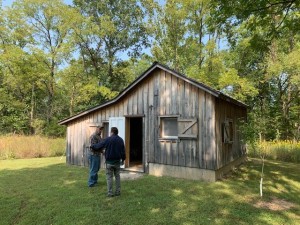 The exterior of the replica Aldo Leopold shack at Prairie Star Restoration Farm is very close to the look of the original residence in Sand County, Wisconsin.

He wonders out loud if generations of Phoebes from the past told their ancestral stories about life in that Depression Era living space on the Wisconsin farm.

Leopold was a professor of ecology at the University of Wisconsin in nearby Madison. The college program was the first of its kind in America. Leopold taught about relationships between all living things and the environment.

In an effort to practice what he preached, Leopold bought the old, worn out farm northeast of Madison along the Wisconsin River. Cockle burs, corn stubble and and a dilapidated chicken shack became Leopold’s self-educating starting point. The tiny animal shelter and restored farm would become a registered U.S. Historic Site.

“Preserved in a constant state of disrepair that shack is a shrine for conservation aficionados,” declared Sassmann. “His book, ‘A Sand County Almanac,’ is the conservationist bible.  Leopold speaks of a land ethic and challenges us to think like a mountain.” 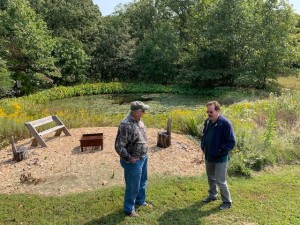 The actual Walden Pond of Thoreau is less secluded and much larger than the idyllic pond located on Prairie Star Restoration Farm.

Sassmann challenges you to think like “a pond” when he ushers you into his Thoreau replica home. Sassmann said that in his “Missouri mind,” a pond is just a tiny body of water. After some study, he learned that Thoreau’s Walden Pond is not tiny.

“I grew up with a distorted image of Thoreau,” Sassmann admitted. “I thought he was a hermit, living by a little pond in Walden woods. I now believe Thoreau’s house was a refuge, an escape from his mom, sisters and aunts. I can’t blame him for wanting a place of his own.

“Thoreau was not a hermit,” added Sassman. “He enjoyed company and his tiny house was on a well-traveled path to Walden Pond. He didn’t confine his existence to Walden woods. He would often return to town to pick up cookies from his mom or drop off a little laundry.”

“Thoreau has left me with one thought I repeat to myself over and over,” explained Sassmann. “Keep in mind that Thoreau was only a regional traveler, but he still had the largest view of the universe.” 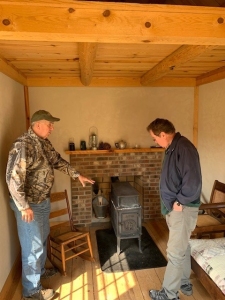 A replica home of Aldo Leopold is equipped with an efficient wood stove and is much more comfortable than the original chicken shack in Sand County, Wisconsin.

Sassmann quotes his sage mentor’s important thought: “What good is a fine house, if you don’t have a tolerable planet to put it on?”

Sassmann would take you next to the cabin of our 22nd U.S. President, if he could. However, that cabin is in the works in his imagination.

“Oh how I would love to have our conservation president, Theodore Roosevelt, represented here on the farm,” he said. “I thought about creating a stone effigy, but someone already did that.

“Maybe I could build a replica of Roosevelt’s North Dakota cabin?   But which one?” Sassmann asked. “The Maltese Cross was the first, Elkhorn the last. Elkhorn is preserved in a few photographs and some imagination.”

Sassman said he thinks the wilderness warrior, “TR,” would approve of the Prairie Star project. He would like the use of animal pelts and bleached skulls as educational tools. He would approve of the site picked for his cabin. And when folks stayed for a night, maybe a little of Roosevelt’s conservation ethic would permeate their souls.

Conservation has never had much political attraction, according to Sassmann. Roosevelt had his share of opposition in proposing a new government agency for wildlife protection and wilderness preservation.

“But Roosevelt started a movement,” stated Sassmann. “And we must continue to govern with the goal of wise use of our resources. We should continue to add to our parks, wilderness areas, wildlife refuges and to our protected forests.”

Sassmann may not get to his project of building a Teddy Roosevelt cabin on the Prairie Star Restoration Farm anytime soon. He was elected to the Missouri House as a Republican this past November and he will be busy with government.

He may get a chance to continue TR’s mission as a wilderness warrior and champion under the dome in Jefferson City. And he may provide a little education on outdoor travel and the environment. He has been appointed to statehouse committees on conservation and natural resources and on state tourism.

(Part II of “Conservation Rules At Misouri’s Prairie Star Farm” will appear on EE in February and will cover Sassmann’s forays into environmental theater and his traveling show known as the “Legends of Conservation.”)