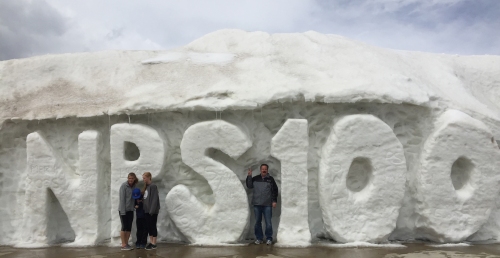 Something about Don fits right in with the 100th Anniversary Celebration of the NPS.

Don Corrigan recently packed up and headed west! He has put pen to paper and chronicled his outdoor adventures in the Rockies.
By Don Corrigan (from his Webster-Kirkwood Times column)

Once in a while I actually take  some advice from story subjects interviewed for this weekly sheet. Such was the case last week, when I found myself driving in a wind-whipped snow squall on Trail Ridge Road in Rocky Mountain National Park.

My wife was petrified – gasping for air. I blamed this harrowing experience on John Terry of Kirkwood who wrote, “Letters From The West,” an  ode to our national parks. He advised a trip to the Colorado Rockies for breath-taking sights to rival the Alps.

Terry was correct. A special visual treat near the summit was a visitor’s center with a giant “NPS100” snow sculpture. The artwork highlights the 100th anniversary of our national parks. My intrepid daughter, a recent transplant to Denver, braved all the snow to take a photo of her anxious dad tucked within the icy numerals. 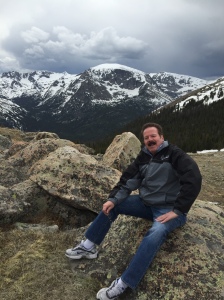 Don takes a break on a hike in Rocky Mountain National Park. It’s still a long way to the summit and the visitor’s center at the top of Trail Ridge Road.

In truth, I was never scared up on those narrow roads popping with corn snow. In Denver, before venturing into the Rockies, I had rubbed the good luck piece of famous Irish lass, Margaret Tobin Brown, better known as “The Unsinkable Molly Brown.”

That emerald good luck piece was in her museum home, just up the street from my daughter’s residence on Pennsylvania Avenue in Denver.  A highlight of the house tour is a first-hand encounter with the lucky charm  – a piece that Molly held tightly when the good ship Titanic hit the iceberg.

Molly survived the sinking of the Titanic, which took the lives of more than 1,500 aboard the ill-fated vessel. Molly not only survived, she became famous for her heroism. She helped people onto lifeboats, and took the oars on her own lifeboat after others broke down from the cold and trauma.

Molly used her new-found fame from the Titanic tale to promote issues she felt strongly about: rights of workers and women, education for children and historic preservation. But that’s another story; this story is about how her good luck charm saved the Corrigans from sliding off a snowy Rocky Mountain road.

Once we were safely back in Estes Park, we stopped to visit the historic Stanley Hotel. Most folks know the  hotel as the inspiration for the movie, “The Shining,” based on Steven King’s novel which reportedly was written, in part, at the Stanley.

That evening, I happened upon another encounter with the “ghost-est with the most-est,” Molly Brown. It was at the hotel show by paranormal illusionist Aiden Sinclair. A Houdini-like character, Sinclair invited me to his stage to experience, once again, a Molly Brown artifact very similar to  her good luck charm I held in Denver.

Then, Sinclair asked me to select  faces from a pack of photos of Titanic passengers. From that pack, I magically selected only survivors, none of  the faces of those who perished in the terrible loss of the Titanic.

So, here I am, back at my berth at the Times – the survivor of a Rocky Mountain High. Thanks for the magic, Mr. Sinclair! Thanks, Molly Brown! Thanks, National Park Service!

Here’s a closer look at Don wedged inside the NPS 100 snow sculpture.