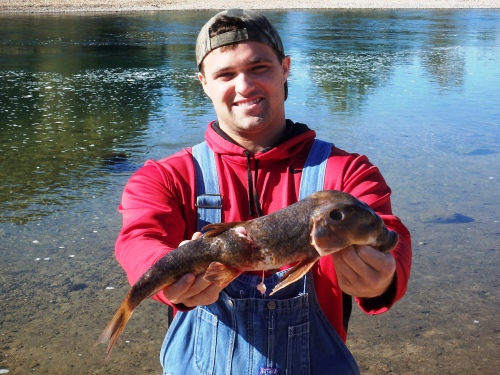 The Missouri Department of Conservation (MDC) reports Jeff Rowland of Poplar Bluff became the most recent record-breaking angler in Missouri when he gigged a northern hog sucker on the Current River in Ripley County. The new “alternative method” record fish caught by Rowland on Oct. 15 weighed 2 pounds, 8 ounces with a length of 18.3 inches. Rowland’s recent catch broke the previous state-record held by his cousin of a 2-pound, 3-ounce northern hog sucker gigged in 2010.

“I knew it was big fish when I gigged it, but I was shocked to see it outweighed the state-record,” Jeff Rowland said.

Once MDC gave Rowland confirmation he had a state record, Rowland said he was super excited. “I can’t believe I now hold the alternative methods state-record for northern hog sucker!” he said. “I am just glad it’s another Rowland holding the record.”