Is There Hope For Radoactive Contamination Clean-up At West Lake Landfill?

There have been decades of public information meetings, public feedback sessions, and government finger-pointing. There have also been years of generational illness – the kind that leaves both adults and children with rare auto-immune disorders and cancers. The result? Devastation to entire communities and families, an endless stack of funeral notices and a future that continued to promise more of the same.

Community members, from Bridgeton and the surrounding areas, showed up for another listening session concerning the radioactive contamination in the local area. This particular session held on October 19, 2017, was about the West Lake Landfill issues. The auditorium filled with around 200 people with 40 signed up for the chance to speak directly to representatives of the federal and regional Environmental Protection Agency (EPA).

Many spoke in anger, many spoke through tears, many spoke with fear, but all spoke from a place of frustration. How can it take thirty years of testing and investigation and still have no answers? Isn’t the people’s government supposed to protect its citizens?

The entirety of the issue is undoubtedly complex and there is no easy or quick solutions, but at its core, the problem is simple – tons of illegally dumped radioactive waste in the West Lake Landfill and Coldwater Creek area has caused irreparable harm and damage to citizens lives and futures.

Find links to more information about the local radioactive contamination issues at the end of this article.

The citizens are still fighting to have their voices heard and spur action to restore the community and make it a safe place for future generations. Cleaning up the contaminated site is the ultimate goal. They want the contamination removed and people living near the landfill relocated. 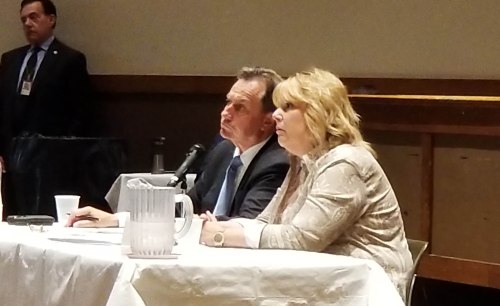 Albert Kelly, chair of the EPA’s Superfund Task Force and advisor to EPA Administrator Scott Pruitt, said during his opening statement that Pruitt is committed to a solution, action and results for the issues at West Lake Landfill.

“In the last 6 months he (Pruitt) has made Superfund site clean-up very prominent,” Kelly said. “He (Pruitt) is returning the EPA to its core mission – to protect health, protect the environment and to protect the water we drink and air we breathe.”

Kelly sat on the government panel with acting EPA Region 7 Administrator Cathy Stepp. They both heard personal testimonies from community members that detailed the health issues, the tragic loss of children, and how the contamination affects the daily lives of local citizens. Speakers were both life-long residents and a few newer members of the community that purchased homes without knowing of the extensive contamination and the adverse public health issues.

Among the community residents, speakers also included state government officials and advocacy groups. Kay Drey, a well-known local environmentalist, was in attendance and spoke as well.

Kelly announced during the public session that more testing outside the landfill will be conducted in areas of community concern. He said the additional testing is not a delay and will not slow a solution and remediation.

In closing, Kelly said he thought everyone attending had a reason to be angry and that he was appreciative of their comments.

“I think your government has let you down and there is no way to sugar coat that,” he said.

“You have no reason to believe us tonight. None. You’ve had every reason to doubt us,” Kelly said. “All I can say is you’ll have to judge us by our actions. We accept the challenge in getting this fixed and getting it fixed right – which we will do.”

Karen Nickel and Dawn Chapman, co-founders of Just Moms STL, an advocacy group for clean-up of the West Lake landfill, helped to organize the event and moderated the proceedings.

Information about the West Lake Landfill issues can be found HERE.

Information about the contamination in North St. Louis County can be found HERE.

This entry was posted in Environment, Local Events. Bookmark the permalink.